Back at the end of last year Elaine and Chris told us they were going to be in Calahonda in early March and had booked to visit the Camino del Rey.  When they told us what it was we asked if we could join them.  Within minutes Chris came back and said ‘All booked’, and we’ve been looking forward to the trip ever since.

Little did we know just what a treat this was to be!  Trust me, if you are visiting the Costa del Sol and get the opportunity to go on an excursion here then do it – hang the cost!!  If not, hire a car and go yourself.  It would probably be a good idea to book though as numbers are limited to ensure the walkway is not over-loaded (or should I say ‘over-weight’??)

Anyway Tuesday 7th March finally arrived.  Chris and Elaine were picking us up at 8am (!!) – well the Ty were meant to….! We took along our trusty SatNav which expertly guided us towards our destination.  All was going swimmingly until within sight of our goal, and a good way up the side of a mountain, the road was suddenly, and completely, closed.  No way round, no diversion and no warning.

We realised that we needed to re-direct towards Ardales but I was having trouble getting the SatNav to re-route (not helped that I was suddenly feeling pretty nauseous and had to hand over to Calv.  So we decided to head for Alora first.  Once re-programmed the SatNav took over again.

Okay.  This is where the fun started!  The town was very small and the roads very narrow.  We tried to follow the 1st instruction which was to go up a very steep hill, which our little Seat Mii was having none of.  So to the smell of burning rubber we freewheeled back down the few metres covered and kept going up the ‘main’ road.  I think we missed a couple of instructions and found ourselves in narrower and narrower roads, all with cars parked alongside.  Calv was itching to have a go at driving and in the end Chris let him.  At this stage we were at the top this time of a steep hill, at the bottom of which we had to take a right.  There were cars parked at the bottom and we couldn’t even see the right turn….

But we made it, and continued following the instructions, or at least thinking we were, until we ended up at the top of the hill at the castle.  Ordinarily we would have liked to visit and explore but we were booked for 11am for the Camino del Rey, so we couldn’t.

We finally found our way towards Ardales and pretty soon we saw signs – you need to follow signs to the North Access.   The scenery was already breathtaking before we even parked up and started towards the trail.

You can choose to take a walk, initially through a, very dark, tunnel which is 1.5km to the beginning of the trail, or a little further up by the restaurant a 2.7km walk.

There is 1 toilet before you go through to collect your helmet (obligatory).  The thin papery thing inside is your hair net!  We were a little late but at this time of year it wasn’t a problem – I suspect it will be later in the season though.  We saw a British man turning away when he found out it cost 10 Euros, plus 1.50 for the bus back.  Fool!  His wife looked suitably embarrassed.  We felt a bit sorry for her.

They let you go on in groups – I think it’s at 15 minute intervals.  You don’t have a guide and don’t have to stay in the groups, it’s just a way of managing the flow and ensuring that the walkway isn’t overloaded!  There were 3 guides at different sections along the way – although they were a bit miserable…

You don’t go straight onto the boardwalk; you join that after a couple of km.  But even before then the scenery is spectacular.  However, all our pictures on here are from the boardwalk as we just can’t post them all!

The Camino del Rey was originally build for the king so that he can visit the works where a reservoir was being built.  You can see it beneath your feet as you walk along (and also the gaps where it has collapsed).  People used to walk this before the new boardwalk was put in until it was closed in 2000 when 3 climbers died whilst navigating it. 2 had also died the previous year.

Read more about it in this Guardian article (which includes a pretty scary video!)

There are many ‘wow’ moments as you turn corners, or simply look down to the river below!  You can also see small sections of walkway on the opposite side of the gorge. 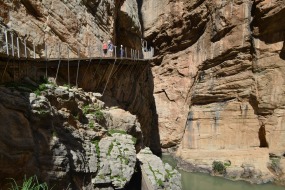 There is a glass floor for you to walk on (no more than 4 people at a time please)! 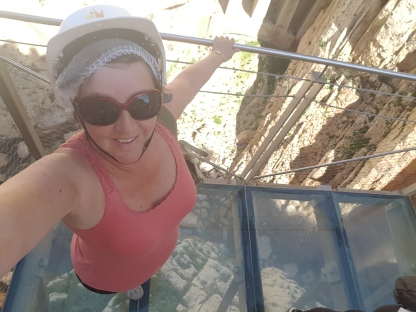 Can you see how far down it is??

We think that about 3 later groups overtook us but that was fine as we were just trying to take it all in!  At regular intervals we watched the trains going past on the other side of the gorge, and wondered at the view they were getting on their commute from Malaga to Seville!

There is lots of wildlife around but we only saw griffon vultures.

Finally, after about 5km, I think, we came to the final section, which involved crossing the gorge on, what turned out to be, a rather wobbly bridge.

The bridge across the gorge 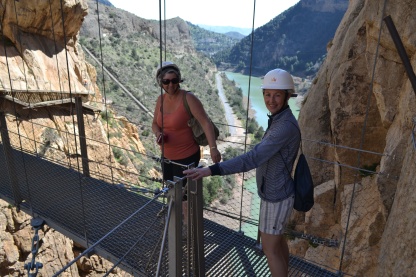 Me and Elaine at the beginning of the wobbly bridge

The final section is quite spectacular and the green bridge you can see here was in the film Von Ryan’s Express (with Frank Sinatra) – Chris told us that! 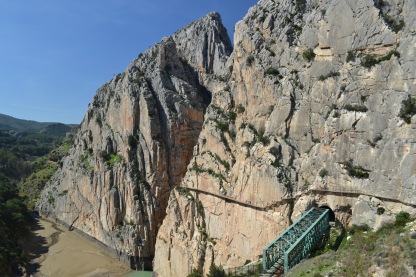 We then had a quick drink at the café at El Churro train station before boarding the bus to go back to the start.  This in itself was an experience.  I did take a video for a few minutes but couldn’t upload it unfortunately.

When we got back we had an ice cream before taking in some more of the scenery from the beach by the lake.  I forgot to mention the colour of the water everywhere – it was just a beautiful green glistening in the sun.  I’m not sure we’ve captured it properly in these photos.  Just after I took my feet out of the water I saw a snake poke it’s head up!  Nobody believed me – but it was definitely a snake 🙂

All in all a rather wonderful day, the best experience of our trip thus far – hands down.  Don’t miss it if you ever get the opportunity – you’ll be missing a treat if you do.  And don’t let a fear of heights put you off – Elaine didn’t; in fact she went back and did it all again on Friday!

Travels | Both Near & Far

food, travel and musings of a TV presenter