We left Don Quijote on Saturday having had to decide to travel further than we normally would, 206 miles (apparently..) as we were struggling to find any campsites open at our preferred distance, which is about 150 miles.

So I input the co-ordinates for Camping Picos de Europa in Avin-Onis.  I was a little surprised at the way the satnav took us, but thought ‘she’s not let us down yet..’.  So we found ourselves heading towards Valladolid and then Palencia and Fromista, a town on the map surrounded by a green box, so we decided to stop there for lunch.  What an interesting place, 4 churches and most properties seemed to be made from wattle and daub (we could see the straw in the very fabric of most of them, though many had been rendered and so looked much newer).  Unfortunately we couldn’t visit any of the churches so we moved on after a short walk.

Fromista, on the way to Picos de Europa

Fromista, on the way to Picos de Europa

We then found ourselves heading towards the mountains and very soon it started to snow.  This was great fun at first, we kept stopping to take photos as the scenery was spectacular (and Calv still had his shorts on..).

The roads remained clear at first but it stopped being fun when we were negotiating the narrow, windy roads high in the mountains and suddenly the roads weren’t clear.  When Calv swears when he sees the road ahead – I start to worry.  I told him that I loved him and kept my mouth shut until we cleared the snowy roads.

However our woes weren’t over!  Having gone through a very pretty town, Potes, from where several walks into the mountains start, we thought we were just 2 miles from our destination.  It wasn’t to be as, it would appear, that I’d managed to feed the wrong co-ordinates into the SatNav (I still don’t know how 😦 ) and we were actually still 40 miles (still through the mountains and gorges – beautiful, but time was now getting on..) away.

We arrived at about 6.15 (8 hours after leaving Don Quijote) and the campsite, Picos de Europa, was perfectly acceptable with a very warm welcome.

The next day we went for a walk towards the small town of Avin.  There were plenty of old, abandoned houses again, but also an attraction, the Glacial Fauna Museum, unfortunately closed until July (and then only open to September).  This is a series of caves with skeletons, including of woolly mammoths and rhinoceri dating back to the paleolithic age.

This walk didn’t take too long so we decided to head up the hill/mountain behind the campsite.  There was a road going almost to the top and, steep as it was in places, we saw a Mitsubishi Shogun pulling a cattle trailer making light work of it!  Very impressive as we were, both, struggling to walk up it! There were also cattle roaming free, going wherever they wanted – you could of course hear them coming though as they were wearing bells.

There were some beautiful views from up there.  We went off piste though and along muddy narrow paths, finding yet more abandoned buildings on route.  We ended up having to come down an extremely steep section, with me holding on to Calv’s shoulders, to get back to the road. 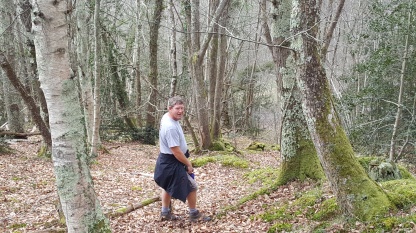 Taking a short cut back down to the campsite at Avin, Picos de Europa

We then ate in the campsite bar together with a couple of other couples – all on different tables but chatting to each other of course!

Time to move on though the next day – a much shorter journey though at just about 40 miles, bringing us to our final, and possibly our favourite of all, site – Caravanning Oyambre

This site is situated about halfway between San Vincente de la Barquera and Comillas.  We visited both in the 2 full days we had there, cycling to San Vincente the 1st day (and being stopped by the Guardia Civil for not wearing our cycle helmets.  He also gave Calv a hard time for visiting Spain yet not speaking Spanish… )  So once Calv had returned to the campsite to collect our helmets, and thereby avoiding a fine of 100 Euros each, we carried on to San Vincente de la Barquera, an old town with a castle and church and fishing harbour.  It also has a nice beach and another one on the estuary, where we sat for a couple of hours before returning to the van.  We cycled 11 miles in total (Calv a little more).

(The cycle helmet law in Spain allows you to go helmetless in towns and cities, but you have to wear them on any urban road where the speed limit is 50kmph or more ).

On our final day in Spain we decided to cycle the other way to Comillas.  Unusually there was a decent pathway the majority of the way, and we chose to use this as it was devoid of pedestrians.  Our ride took us along the estuary 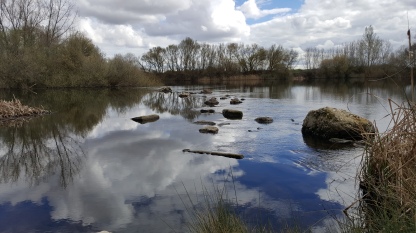 and past a couple of viewing points until we came across Comillas and immediately could see a palace, Palacio de Sobrellano and a university pontificia.  We tried to visit the palace but you could only visit by the tour and there wasn’t another starting for 20 minutes.  So we had a look around the outside of the palace and the church next to it before moving on through a different park entrance to the town proper.

Here we had our 1st sight of a house by Antoni Gaudi, El Capricho.  We found a tree to tie the bikes to in the square where the Town Hall is situated (there is a severe lack of places to lock up to, we have found anyway, in Northern Spain).  We then wandered a little and found the historic square and the church before settling down for some lunch.  I actually had Chocolate and churros and, this time, I was served nice fresh churros and I ordered a Spanish hot chocolate to dip them into – I have to say I really enjoyed them!

Now it was time to visit El Capricho 🙂 At 5 Euros each it is definitely worth it; small but perfectly formed!  Created by Gaudi it has everything you would expect, little details such as a bee playing a guitar in a stained glass window, and ceramic sunflowers adorning the exterior. 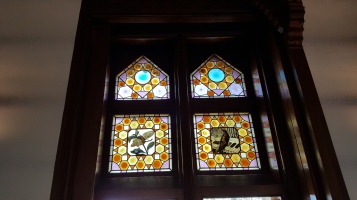 But Comillas hadn’t finished with us yet.  Instead of going back the way we’d come we cycled straight across at the traffic lights (rather than go left).  We found a beautiful house that seemed empty and abandoned (it wasn’t falling down though, so there’s still time for it to be saved) and then we spotted the cemetery up on the hill.  Now this was a cemetery like no other we have seen.  It was actually built in and around the original church and was really rather amazing.

We then carried on along the coast and cycled through another ancient village up in the hills, Trasvia, before returning to the main road.

We then spent a couple of hours on the beach as our last hurrah in Spain. 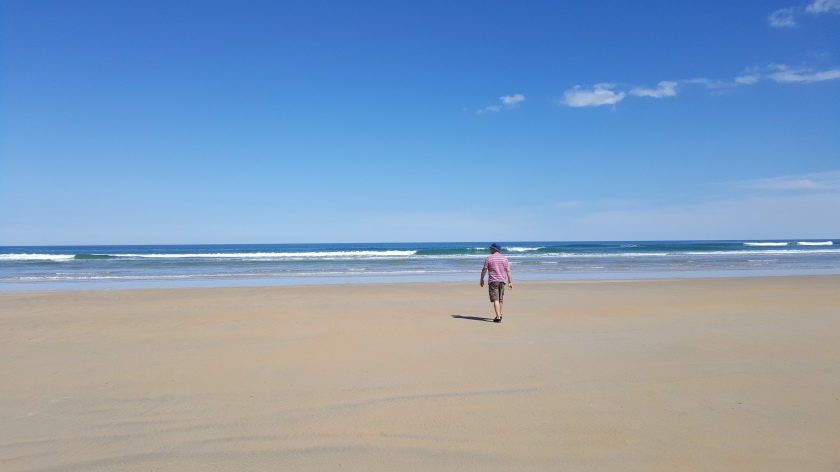 Our visit to Spain and Portugal therefore finished on a real high and in the evening we started getting ready for leaving in the morning for the ferry.  We are now back at home – well on our chosen campsite anyway, catching up with friends and family before leaving on our UK adventure just before Easter. 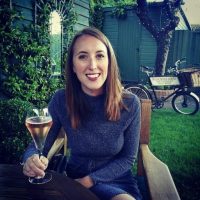 Exploring the world one small piece at a time!

Welcome to my travel blog! Check out my posts below and subscribe to keep updated!