A fitting title for this, my last post, as we spent our last day visiting the D-Day beaches in Normandy.  So also a very sobering day.  After all, if it wasn’t for such sacrifices we probably wouldn’t have been able to do what we’ve just done for almost 6 weeks.

As we drove through Bayeux on our way to Point du Hoc we noticed signs for the British Cemetery but decided to keep going and visit at the end of the day.  Little did we realise that it would be another 10 hours before we started heading back to the van, and we would be a long way from Bayeux by then!

We headed for Point du Hoc which is where the Americans climbed the cliffs to take the German position to enable the rest of D-Day to be successful.  There were lots of information boards on the way down to the Point and at the Point itself, with some very poignant messages.  It’s difficult to imagine the carnage that occurred at such a beautiful spot – even though there are so many bomb craters still very obvious.

Pont du Hoc where the Americans scaled the cliffs

The cliffs below Pont du Hoc

Several of the German emplacements survive in various degrees, and they are all accessible.  We did spend a good couple of hours here. It’s also where Calv found out that the fences that look like they might be electric, but aren’t labelled as such, really are!  He accidently touched one with the camera and got thrown violently backwards – he was a bit shaken! 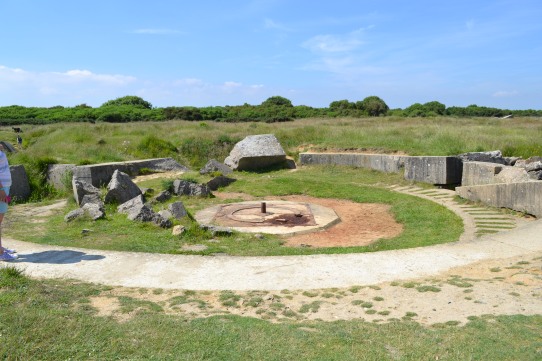 Existing 1 of the many bunkers at Pont du Hoc

We moved on through some charming villages and stopped at various different points along the coast, firstly Omaha Beach, where we caught our 1st glimpse of the remains of the Mulberry harbour.  It seemed very strange to see people splashing about in the sea when you think of what happened here…

We eventually found our way to Arramonches (Gold Beach –  where the British came ashore – as well as at Sword Beach, which is a little more commercialised than I was expecting).  We found somewhere to eat here and I really enjoyed my Normandy chicken (even though it was delivered within just a few minutes of ordering!)  There was a picture on the wall opposite where we ate which looked suspiciously like a Banksy.. 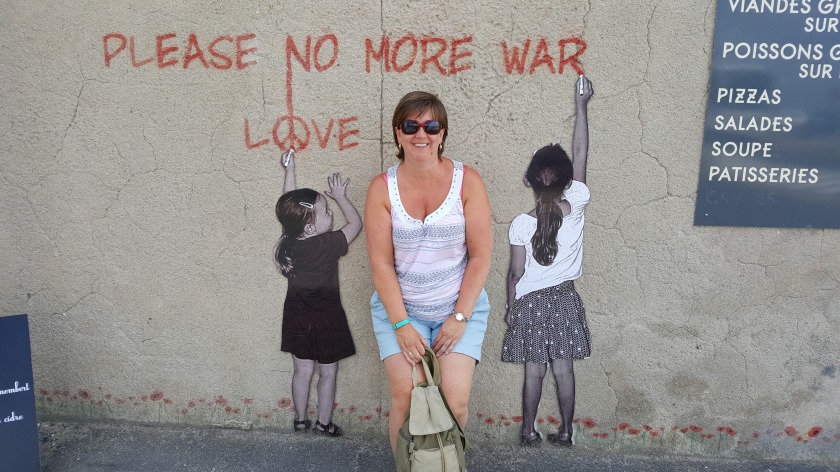 Walking up out of town we headed up (and it was properly steep) the hill to the 360 degree cinema, which shows a film on 9 screens of actual footage from the period around D-Day and the villages being liberated.  It was a wonderful film to watch but frustrating as being 360 degrees you knew that you were missing things that were showing behind you.  When we left Arramonches we were gutted to realise we could have brought the car up the road to park!

Next stop was Juno beach, which was where the Canadians came ashore.  We went for a short cycle ride here and explored some more emplacements – although there were others that were locked up.

Time was getting on now and we were both tiring but we knew we couldn’t leave the area without visiting a cemetery to pay our respects.  There were none detailed on the map that we had so I had to do a bit of research on the phone.  We decided to visit Hermanville and found the town with no problems but had to do a bit more investigation to find the cemetery, but we did and it was very moving.  They are so beautifully kept (we also visited a Canadian cemetery on the way back to the van), and I don’t mind admitting that I was moved to tears when reading some of the headstones.  Very sobering x 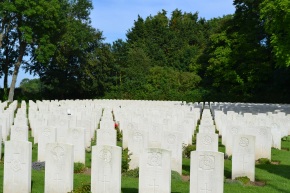 We’re so glad that we had these couple of nights in Normandy and only wish we had perhaps allowed a couple more nights, as we really only scratched the surface of what there is to see.  As with everywhere we just didn’t have enough time!

What a wonderful trip we have had.  We can’t wait to do it again!  I will be posting some more pictures in the gallery, and perhaps a couple of reviews of the campsites (in case you ever get the chance to do this yourselves…)

Thank you for reading – look out next year for my weekly (I’ve learned not to try to update daily, if nothing else!) posts from around the UK.