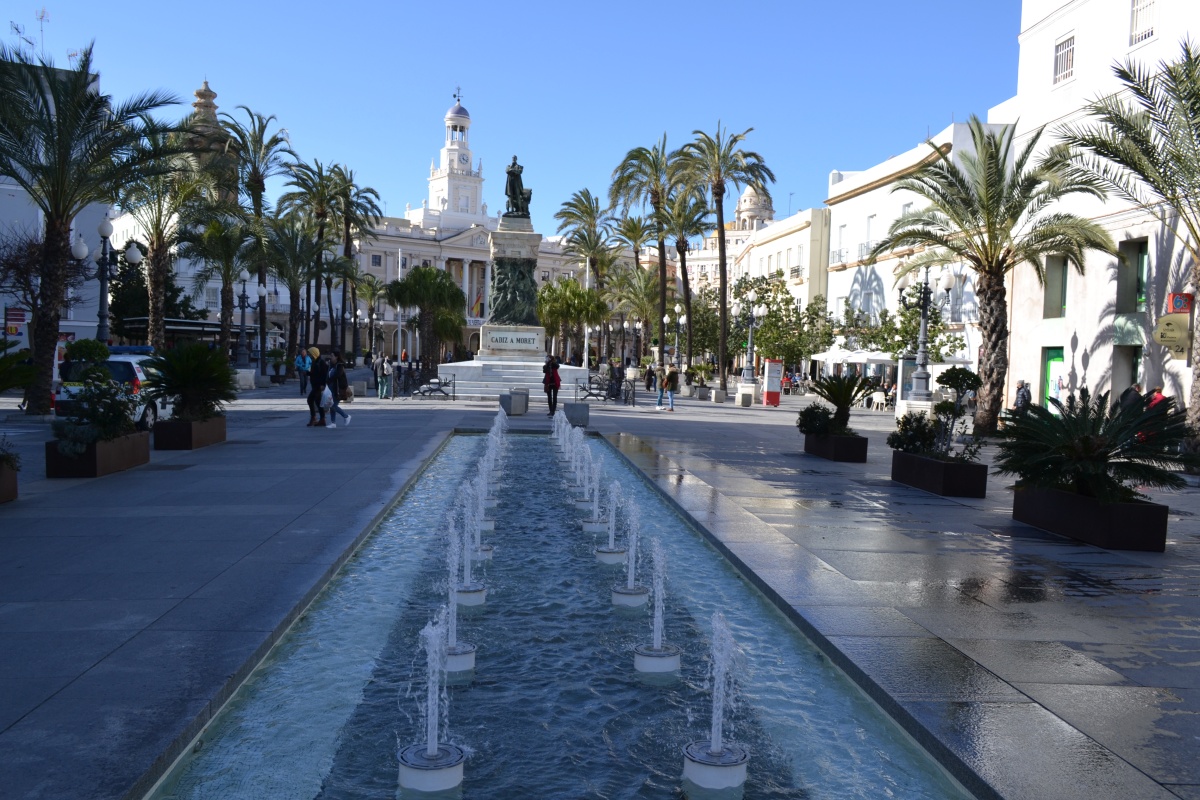 Before we left on this trip I knew that 1 of the places I wanted to visit this time was Cadiz, on the south-west coast of Spain.

What I didn’t know was that it is considered to be the oldest continuously inhabited city in Europe, partly because they ‘capitulated’ to the Romans, meaning that they were able to keep most of their own customs and leading to Cadiz (Gades, as it was then) becoming one of the most important cities in the Roman Empire (and also one of the most infamous, due to the inhabitants lifestyle – and their Gaditan dancing girls).

Cadiz is a tiny city – it wouldn’t actually be difficult to walk around it, taking in all the principal sights, within a day.  And, it certainly didn’t disappoint!  But before we finally managed to visit (more on that later) we explored the immediate area around the campsite we stayed at (Playa las Dunas, El Puerto de Santa Maria), and also a visit to Jerez.

Our campsite was immediately in front of a beautiful beach.  There is a lovely promenade stretching a couple of miles, although the cycle path goes further (we cycled it on a VERY windy day!)  There is also a large pine forest backing onto the beach, well used by locals at the weekend for picnics etc.

There is a ferry that, apparently, will take you directly to Cadiz.. We tried 3 times before giving up and driving!  The first time we really couldn’t understand why the ferry was cancelled – we actually took a video of the placid waters leaving the harbour..  The other 2 days we must admit it was a little lumpy (although the Isle of Wight ferry would have, without a doubt, been sailing!!)

Our first day out though started as a quick cycle ride along the promenade and ended in the narrow, quirky lanes of the old town (the advice when arriving in a motorhome is to make sure you DON’T try to go through the old town – we took a detour of a couple of miles just to make sure.  We were glad we had once we saw the streets!)

This is a charming little town which reminded us both of Havana.  Funnily enough we later learned that Cadiz itself is often called ‘Little Havana’ – we could see why, but we actually thought that El Puerto Maria was more of a fit for this name. 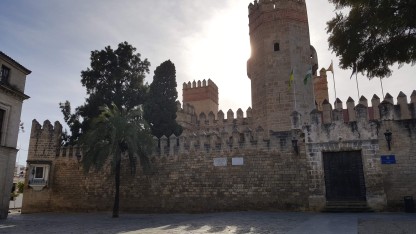 The next day saw our first attempt to catch the ferry to Cadiz.  And our first failure!  We didn’t fancy the ‘replacement bus service’ (which would have taken us well over an hour), so headed off to Jerez instead.

Approaching on the main road there is nothing for miles and then suddenly in the distance you see this settlement – what I mean is, there is nothing and then you can see the city plonked in the nothingness!  Once in the city the traffic is busy so we decided to just head for 1 of the underground parking garages (which wasn’t overly expensive), and we emerged into the main square, Plaza de Arenal, where we stopped for a drink – sat outside (where it wasn’t overly warm!)

The tourist office is in an amazing building here, and we had a quick look before simply following the signs towards the Alcazaba.  This was an impressive building bordering by the Alameda Vieja, which I discovered means a ‘tree-lined avenue’, often Poplars.  It also contained a bandstand and has recently been extensively renovated.  Very popular, yet peaceful (as I said, it wasn’t the warmest of days!)

Our next discovery was the Iglesia de San Miguel.  Set in a tiny square set with orange trees, we paid 5Euros each (but this also gave us entry to the cathedral and bell tower).  The cathedral housed the most intricate, impressive nativity scene that I have ever seen!

Small and delightful I think just about covers this 🙂

On the way to the cathedral we saw many ancient buildings, including the church of Dionisio.  Admittedly it would have been nice to take advantage of the CityBus (tourist open top) which runs through the city, but unfortunately there was no sign of it on the day we visited. 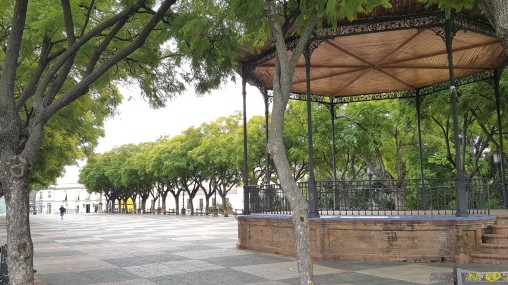 Bandstand on the Alameda, Jerez 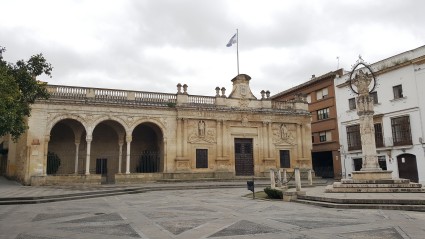 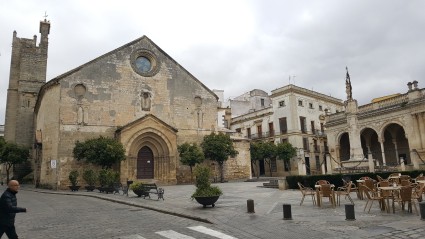 You may have noticed that I haven’t mentioned sherry, which is obviously what Jerez is most famous for?  Well, there were several bodegas and Caves (some very large), but neither of us actually like sherry and so we’re not drawn to these places as most other people are, but there is plenty of choice if this is what you’re looking for!

We also didn’t visit the famous equestrian school (Fundacion Real Escuela).  I would have liked to but it was a little way out of town and at a price of approx. 20Euros each for a show we decided against it.  You can visit the school and museums for a much lower price, but for me it would be the show I wanted.

The next day found us attempted, once again, to catch the ferry to Cadiz.  Once again the ferry was cancelled (admittedly it was a little more blustery this time).  So we decided to go for a bike ride the other way along the promenade.  A lovely ride, finding more beautiful beaches, a sailing school and marina (Puerto Sherry), places for motorhomes to park up by the beach and a ruined castle atop the cliffs.  It did get extremely windy though so we turned back after about an hour.

Impressive cacti in the ruins of Santa Catalina castle 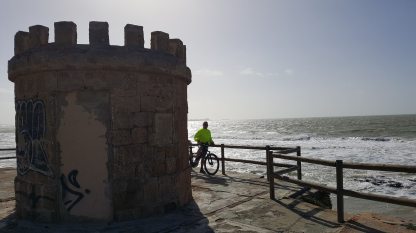 When we tried the ferry again the next day, we decided to give up and drive!  It took us about 1/2 hour, taking us past the wetlands of Cadiz (with their many paths and bird-watching opportunities), and over the, rather impressive, la Puente de la Constitution 1812 (there is a choice of 2 bridges), and parking underground (this is normal in Spain :))

Cadiz is absolutely charming.  And very compact.  Once again it was very windy when we visited, which meant we didn’t visit the castles sites slightly offshore and accessible via a causeway – I was worried we might get blown into the sea!!  On leaving the centre we had driven around the coast road, and as I didn’t realise how small it was I was completely disoriented, not believing we had actually passed by all the sights I should have been looking out for!  They are in the process of laying a proper cycle path (i.e. smooth – unlike the one at Puerto de Santa Maria.  Which, at first sight, looks excellent, but is actually made of bricks, many of which are now rising meaning that you have to really concentrate when riding along it).

In the centre there are several walks to follow.  Quite literally!  In a couple of the following photos you might notice a coloured line on the road?  You simply follow the colour that you want to – very easy 🙂  Incidentally we visited on a Saturday, and found that you could visit the cathedral for free (although not the bell tower), after the service.

We also watched young ladies learning flamenco, of which there is a rich history in Cadiz.

There is so much to see in this little city and I wouldn’t be surprised if we returned another day.  Highly recommended 🙂 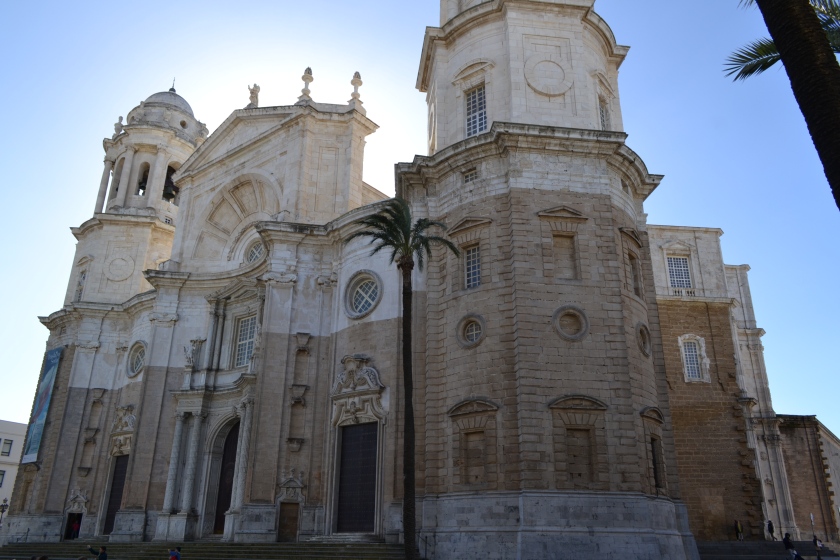 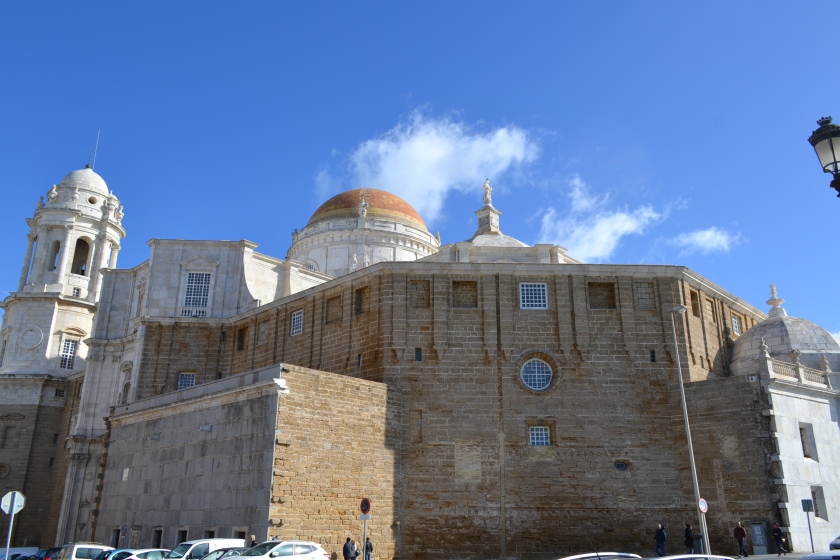 Supermarkets close by: – Mercadona (just behind the campsite, but you have to take a detour to get there!  Walking distance and certainly cycling distance