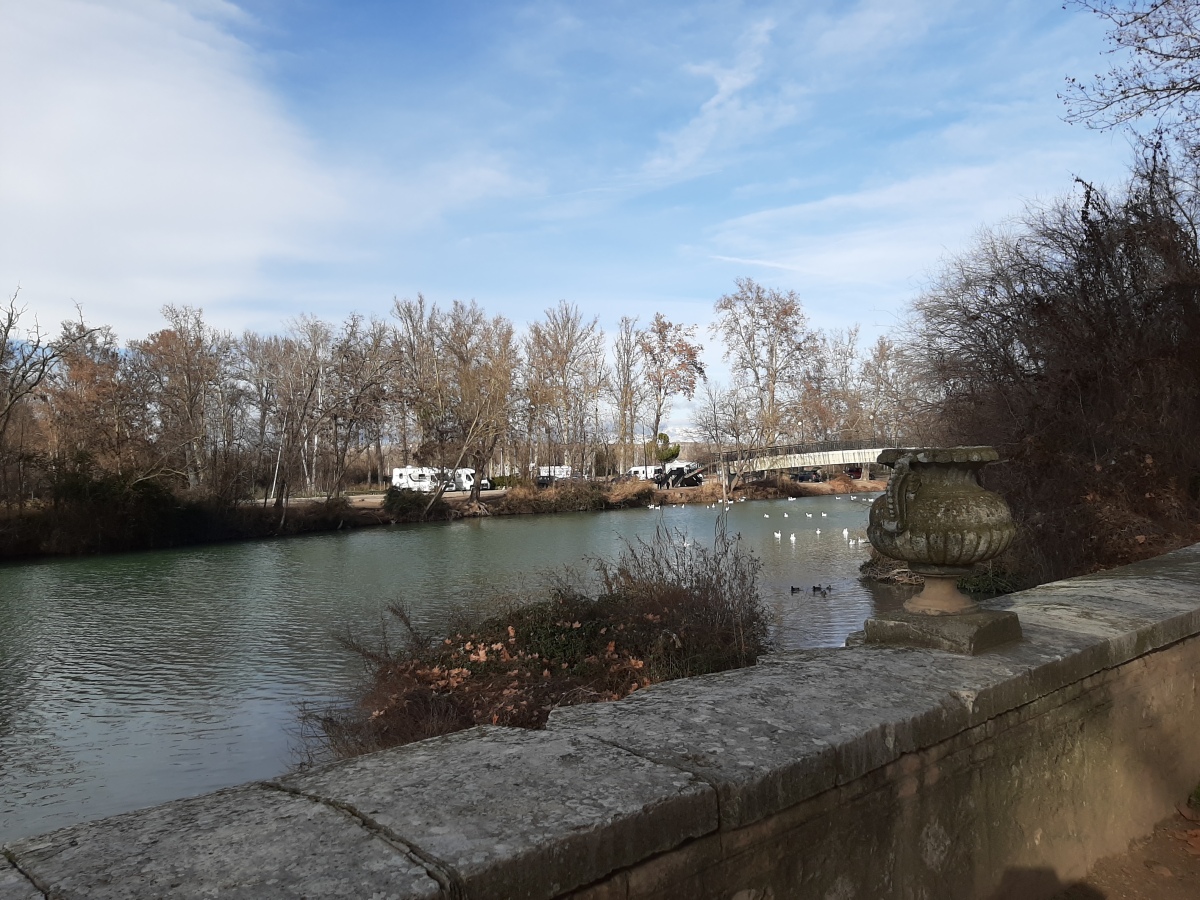 Last time we took the ferry to Spain in January 2017 we went into Bilbao and had to then spend 5 nights at our 1st site in Zaurutz whilst waiting to get my tablet back (I’d left it in our cabin…) This wasn’t a major issue though as we were taking our time to reach the coast, via Pamplona.

This time however (January 2022) we docked in Santander (after a nightmare journey – read about it here), and the intention was to travel in the most direct manner south. Together with our travelling companions, Steve and Denise, we decided on the next night’s stop each evening. Actually, let’s be honest here, Steve and I found each evening’s park up between us!

We decided on 3 overnight stops before reaching the coast – it can, of course, be achieved quicker, but we wanted to enjoy the journey and see some new sites on our way.

So the 1st leg was Santander to Aranda de Duero just south of Burgos, roughly 150 miles in total. We stopped in an approved area with services, by the river and had a wander into the lovely little old town across the river. I also met a lady who had the misfortune to have had the same horrendous crossing as I experienced – only this poor lady hadn’t benefitted from the comfort of a cabin 😦

The following day we made it a further 125 miles south to the beautiful town of Aranjuez just south of Madrid. We had been somewhat concerned about negotiating our way around or through Madrid, but it was Sunday and we decided to head straight through (on the motorway of course!) You just need to keep your wits about you and make sure you follow the signs for Cordoba/Granada. I think I was more stressed than Calv trying to ensure I got the navigation right!

This time our stop off was by the side of a river, and just before a campsite (Camping Internationale). We parked up and headed straight across the bridge to the Palace Gardens to follow the river into town. Sadly the Royal Palace was closed, but plenty of bars were open, and we took full advantage. This is a lovely place and we would happily return for another visit.

We had a slightly longer journey the next day (about 175 miles) heading to an Area de Autocaravannas that I’d found in La Guardia de Jaen– it looked wonderful but some of the reviews suggested that we might struggle to reach it in our van. We decided to give it a go anyway as we were coming from the north. Absolutely no issues were experienced and this spot is an absolute gem 🙂 We stayed 2 nights in the end. The only problem was that it took us 3 attempts to find the little supermarket open, and the only bar open at all while we were there was a very local one – Calv poked his head through the door and said it looked like someone’s front room filled with men (exclusively) smoking and drinking.

We saw a red squirrel in the trees in the valley by the area, and Calv and I walked up to viewing point high above us – a very steep climb; one of those that was as bad coming down as going up! We also walked around the town and up to the castle (sadly closed), around the back of the castle to the church (similarly closed) where there were additions tacked on where families were living, down to the garage to get drinking water – there was another bar here that was actually open – entailing another steep climb back up to the van.

Click on the link above for advice on how to arrive at this area (i.e. we would recommend that you don’t try and come through the town itself, you need to approach from the north, which might entail going past and then coming back on yourselves). This is probably the best free stopover we have ever stopped on (although Algodanales in the hills north of Ronda comes a very close second 🙂 )

After La Guardia de Jaen we headed for the coast and 1 last free night (in Cala de Mijas) before arriving at Camping Cabopino for a few weeks. We had to go via Granada having found a Caravan Dealership where we could buy ACSI cards (we had ordered ours before christmas but they hadn’t arrived before we left home).

This final stint we did in 1 hit (apart from the stop to buy ACSI). We know the free area in La Cala (de Mijas) well from previous stays, but on arrival we were shocked at how many motorhomes were there! It’s normally very well policed, but they were spilling over outside the accepted area – there must have been 3 times as many vans as would normally be allowed 😦 We decided to stay for 1 night however (it’s very handy for a night out)). We were now able to head out to do a proper shop – we tried the Aldi (not too keen tbh), and then headed back out to Lidl in the morning for the bits we couldn’t get in Aldi!

A meal in El Gusto (because Biddy Mulligan’s shut the kitchen at 5pm – their loss, we discovered El Gusto next door and will return!) was most welcome and very, very good.

We’re now settled at Cabopino for a few weeks and in my next post I’ll tell you about trips to Marbella Old Town and La Cala de Mijas (on the bus!)