The sun came out today!

Well rested after yesterday’s journey we set out on our bikes along the cycle path, heading towards Ares centre.  We actually ended up in Andernos, a little way along the coast, which was quite charming.

We stopped in a bar for a café au lait (the young barman didn’t understand, it appears I should have asked for café crème..) and a chocolate.  They came in very small cups – which was just as well as my chocolate was sooo strong I’m not sure I could have drank much more.

When leaving we headed off in a different direction, trying to go along the coast but blocked by a marina (isn’t it always the way?)  Instead we found another aire, a lovely little church and a nature reserve to pedal through.

We went off one way but soon had to push our bikes through sand. END_OF_DOCUMENT_TOKEN_TO_BE_REPLACED

We didn’t set off until after midday yesterday, which turned out to be a mistake as the next journey always takes longer than you think it will….

So anyway we went off on a little bike ride before leaving.  Back to a spot that we found on the 1st evening where the steps down to the shore have worn away, and you have to climb down with the aid of a rope (yes, there are pictures and I will add them as soon as I get a strong enough wifi signal to allow me to upload enough pictures).  The coast here reminds me very much of parts of North Cornwall in that it’s very rocky.  We watched men scouring the rocks for cockles and checked out the rockpools, but didn’t find anything this time.  We scrambled up a different way (with Calv telling me to go back the other way ‘cos ‘it wasn’t for girls’.  So it was a bit muddy & marshy & very high grassy – but I had to go that way then didn’t I?

The only way down to the beach!

The beach near Talmont 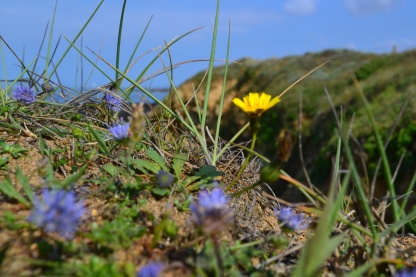 Finally we were en-route (yes we went the wrong way again..), but it wasn’t long before we spotted an interesting feature in a little town, as well as another lovely church.  It was an old open market hall, but nothing being made of it.  In fact, the area around it was being used as a carpark!  Next stop was past La Rochelle (which I popped a few photos onto Facebook from yesterday).  I wished I’d spotted that snake a bit quicker though!

And then we had to find our way to the ferry at Royan (twinned with Gosport!)  The SatNav came up trumps here as there is no way we would have found it without her!  (Once again I have to say the signage over here is severely lacking..)

We’d just missed 1 ferry, but were in plenty of time for the next.  Until the queue starting moving, but the German van in front of us remained resolutely stationery – no-one in it!  It wasn’t easy to go round as we had to reverse, which you can’t do with the car attached behind.  By the time we’d decided we had no choice but to unhook the rest of the queue had decided to go past.  However a kindly Italian coach driver left enough space in front of him to allow us to re-hitch (I think it was unintentional!)  It seems the German didn’t return to his van in time and missed the ferry – shame (for all the chaos he caused).

We also met a couple of Irish lads who were cycling from St Malo to Santander.  Turns out they actually live in Southampton and had met a couple from Fareham earlier that day – small world and all that.

Once we’d paid our extortionate fee (not explained on the tariff board) of 95 euros – because we were a double axle (no longer than the car/caravan combos, but 3 times the price) we sat waiting with everyone else.  The French aren’t shy in nosing about the van towing the car (they’re not allowed to do it – tow a car that is) and with nothing else to do we had many of them coming to have a look – this is quite normal now!

It’s a nice little site.  Mixed toilets again (the last site wasn’t!)  This time though, instead of 1 cubicle for the hole in the floor we simply have no toilet seats!

There’s a cycle path immediately behind the site which we shall make use of tomorrow.  For now it’s an omelette for me and left0ver curry for Calv.

I’ve had to start putting days and dates on these blogs as I’m beginning to forget what day it is.  When the owner here asked where we’d stayed last night it took me ages to remember!

Late summer Roses from our garden. If only you could smell them... Beautiful 💖 #roses #gardenroses #smellwonderful #smellyvision #cutroses #latesummerflowers
Right on our doorstep. Took my dad down to Lee seafront for an ice cream. Looking rather lovely - how lucky are we? #rightonourdoorstep #leeonsolent #seafront #sparklingsea #penguincafe #lovewhereyoulive #beautifulautumnday
Chocolate!! This was part of our haul from the Trenance Chocolate Factory in Mullion. Not all for us, honest 😁 very nice too (that's from someone who only really likes Cadbury... And Lily O'Briens) #trenancechocolate #handcraftedchocolates #mullion #lilyobriens #cadbury #highlyrecommended #chocolate
Finally visited Trecarne Pottery, which we passed every time we went out and back to Mullion. So glad we did - these were my purchases. The Potter is Marius Roux. The plate design modelled on the local chough. Would highly recommend a visit 😊 #pottery #uniquegifts #chough #mariusroux #trecarnepottery #mullion #potteryplate #potteryfish
On Thursday we visited Helston (of floral dance, Terry Wogan fame, or notoriety! ). We intended to do the town trail but our hearts weren't really in it. We did spot a couple of the signs on our short wander though. The memorial next to the bowling green (obviously well used and in need of a little patching) was impressive and had good information. The channels in the road are called kennels. That's all I learned I'm afraid. Maybe next time?! #helston #cornwall #floraldance #kennels #waterpumps #historictown #vanlifeuk
You seriously can't complain when this is what you get when you come home from holiday can you?! #homefromholiday #cannotcomplain #portchestercastle #spinnakertower #portsmouthharbour #creek #lovewhereyoulive #lovewhereilive #portchester #castle
Loading Comments...