Great Yarmouth has both a horse racing track and a greyhound stadium.  As I’ve never ‘been to the dogs’ I thought it might be worth a visit.  So Wednesday evening found us joining the hordes (might be a bit of an exaggeration..) attending the races.

You pay to get in and then, of course, to bet.  The 6 horses are paraded around to be shown in front of the crowd; at this point many of them take the opportunity to, shall we say, lighten their load!  They’re loaded into the starting stalls, the hare (orange) comes racing around and away they go to race for 1 1/4 laps (about 30-35 seconds in total!)  I have to admit it wasn’t overly exciting and I doubt we’ll bother going again.  But, it’s always nice to do something you haven’t done and, you never know, we MIGHT have won big….. 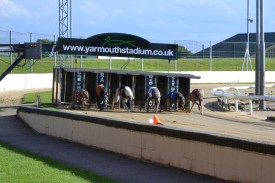 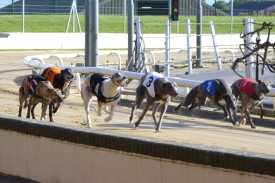 On Friday we decided to go to Norwich.  This was somewhere else that hadn’t been on our radar, but having read what the ‘Rough Guide’ had to say we decided that we really should make the effort.

We were glad we did and wished that we’d got up a bit earlier so that we could have seen more of it.We parked in the Riverside complex.  Be careful here as there are 2 tariffs, one of which is for rail users.  If you aren’t a rail user and go over 4 hours it will cost you £20!  Up to 4 hours though it’s pretty reasonable.

From here we wandered past the really rather impressive railway station towards the river.  It would appear that the path along the river doesn’t go under any of the bridges as on the 2 we came across you had to come up and cross the road.

We were headed for the Cow Tower and came across this medieval bridge.  We had to take shelter on the way to the tower as it started raining really hard!

From the Cow Tower we made our way towards the cathedral which was clearly visible across the school playing fields.  (There is actually a 2nd cathedral in the city, but we didn’t have time to visit). 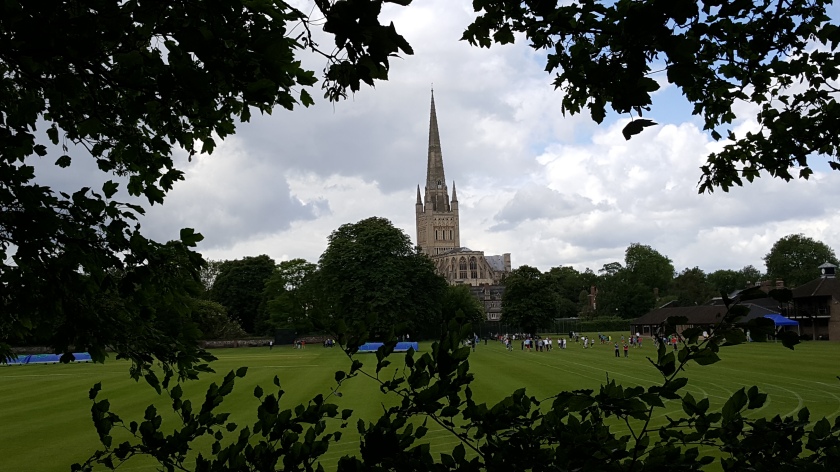 The cathedral is very impressive and has a school attached to it, which Nelson attended (which explained the monuments to him that we have seen cropping up in Norfolk, including outside the cathedral).  It is also free to enter – don’t make the mistake of thinking that this is because there’s nothing to see; this cathedral is almost as impressive as Canterbury cathedral.

We started with lunch in the refectory, which was very nice and also reasonably priced.  From there we headed through the cloisters, boisterous with school children playing on the green (it was lunchtime), spotting the seating areas worn down by thousands of monks taking their rest over hundreds of years!

In the cathedral we stumbled upon a tour about to start and so joined in.  We were with an American couple and a Dutch man, and being given the history of the cathedral by a Danish lady! (She has lived here for over 40 years 🙂 )

There was an ongoing demonstration of the organ while we were there which was absolutely amazing.  This wonderful sound just completely fills the space.

We learned so much, including the fact that every bosse in the ceiling (an essential part of the ceiling – pretty much holding it up!) is a different carving (including in the ceiling of the covered walkway around the cloisters) telling the bible stories.

We learned about the ‘pelican’ lectern’ which doesn’t look like a pelican at all – of course, the sculptor charged with creating it had no real idea what a pelican looked like!

Bosse in the cloisters of Norwich Cathedral

Also we learned that this painting, below, (14th century) was discovered being used as a table.  It was only found when a workman who was using it to keep tools on (or some such thing) dropped a tool and looked underneath!  They haven’t even had to do much restoration on it 🙂

Not everything is old though – the new font was donated by the old chocolate factory when it closed in 2004.

The spire is home to a pair of peregrine falcons that return every year to breed.

Norwich cathedral is beautiful – a visit is highly recommended.

We also visited the castle, which was only £2 each as we arrived with only an hour left before closing.  This compared to the normal entry price of £9.15 each and an hour was ample time to see everything.  This included an interesting exhibition in the dungeon relating to the old prisons in the castle and also several interactive displays involving building bridges and arches….

On the main floor you could see where the kitchens and the chapel were and also drop coins down into the well (this was most confusing when we were down in the dungeons as we kept hearing things dropping!)

The only thing that you can’t visit at the reduced price are the battlements.

On the way back to the car we saw The Strangers Hall.  It looked rather lovely, but was unfortunately closed! 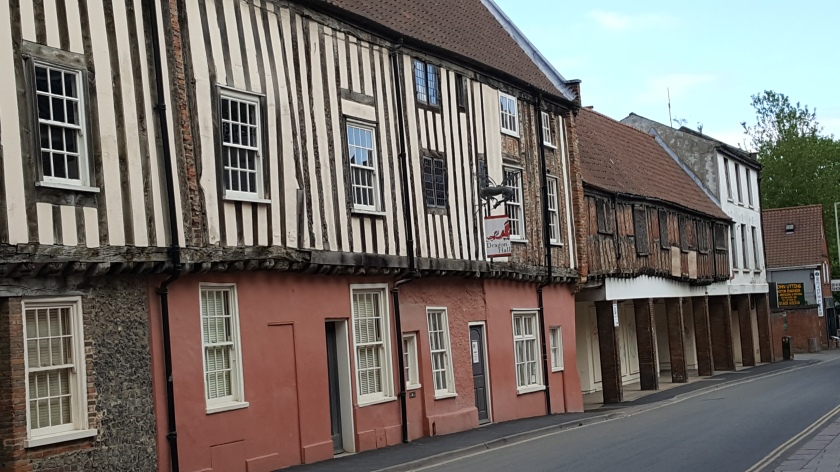 As we left the city was coming alive with nightlife around us, which all looked rather fun 🙂