This is a final mop-up of our time, so far, in Yorkshire (we’re heading back via York next week..), and it will cover a 2nd visit to Scarborough – to the North Bay area and the castle, a flying visit to Burton Agnes & the Rudston Monolith, the Muston scarecrow festival and Boggle Hole (visited on the way home from Whitby).

So let’s start with Boggle Hole (where the main picture was taken).  We just saw the sign on the way home and thought it was a good name and we’d have a look!  We took the lane, which turned out to be long and narrow, until we came to a small parking area – keep going, says Calv.  Only we couldn’t as there was a sign up advising against it!  The lane that we walked down was steep and led to a YHA hostel and the Quarterdeck café.  These were nestled at the top of a rocky cove where fossil hunts are regularly held – and it was pretty busy still when we arrived.  There were some steps leading up the hillside which we decided to explore – there were a lot more than we were expecting (from memory I think it was 134…) and they were the usual mix of different sizes and steepness!

It was a steep climb back to the car, but no worse than anything else we’d done that day!

As we made our way back up to the main road Calv suddenly screamed at me to stop.  He’d spotted an owl just sitting on a post.  Of course, by the time he’d got the camera ready the owl flew away 😦

Next up, Burton Agnes.  We went here because we had driven past the village a couple of times and it looked really pretty, and there is also an English Heritage property here to visit (and it was raining…)

The main hall of the norman manor houes

We could see signs for a monolith, the Rudston Monolith, so continued up the B road in that direction.  Let me save you some time here….  It’s in the churchyard!!  We spent ages driving round and round looking for it…  It is the tallest prehistoric standing stone in Britain, and some say that there is a dinosaur paw imprint on it….

As we had more of the day left than originally anticipated we decided that now would be a good time to visit Scarborough.  I have already written about our 1st visit to Scarborough, but not about driving through the little village of Muston on the way.

We drove through Muston during their annual (since 1999) scarecrow festival!  It was an absolute delight, with almost every household displaying a scarecrow – or so it seemed anyway.  There were an awful lot of people in the village to see the scarecrows.  The last two we saw before leaving the village were of Kim Yong Un and Donald Trump…

We took no pictures I’m afraid as we didn’t actually stop, but you can get more information here.

On our final day in Yorkshire we decided to re-visit Scarborough to take in the castle.  We tried to park as close to the castle as possible (there is a car park in front of St Marys Church), but didn’t have any coins (I gave all my spare to a French family in Robin Hood’s Bay), and none of the machines took cards yet (including those along the Marine Drive).  So we ended up driving through the North Bay area and finding some free parking alongside the pitch and putt of Peasholm Park – bonus 🙂

Our first stop was onto the beach for a quick photo of the beach huts and to watch the waves crashing in as the tide swept in.  We then had a pitstop in the Peaches n’ Cream café, which is next to a crazy gold course (very nice too), before heading up to the castle itself.  This was quite a walk and all of it uphill!

On the way we passed 3 bowling greens (open to the public) hidden away in a park on the cliff, before finding the castle itself.  This is another English Heritage property and was fairly busy, as the rain had stopped for a while – although it was very windy up there! 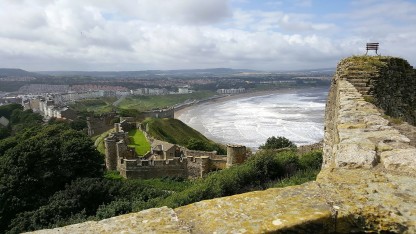 The remains of the keep at Scarborough Castle

The castle sits on the promontory that separates the South & North Bays of Scarborough and affords amazing views, particularly from the top of the keep.

On leaving the castle we descended by a different route and walked along the seafront promenade where we found this  sculpture of Freddie Gilroy.  He was a soldier who was one of the first to enter Belsen Concentration Camp on it’s liberation.  The statue is huge and was originally loaned to the town for 1 month, until it was bought by a local resident, meaning it could now remain there.

Our last stop was to Peasholm Park where the boating lake is situated.  And what a boating lake!  There are swan pedalos, rowing boats, an island reached by a bridge, a pagoda, a café and a bandstand in the middle of the lake!  There was somebody playing in there as well!  There’s also a pitch and putt course as previously mentioned.

We had seen signs for an historic water chute but didn’t actually manage to find it,(although we do know where it is, beside the north bay railway  and we did find the remains of the workings of one of the defunct tramways 🙂 ).  If we return we will definitely seek this out as one of the 1st things we do 🙂