The day after we discovered Woodhall Spa we returned to watch a film, Dunkirk, in the Kinema in the Woods.

Very close by lies Tattershall, a very pretty village with an impressive church and a magnificent castle (now managed by the National Trust).

The film was starting at 5.15pm so in the afternoon we decided to visit Tattershall first.

As we left the car park we saw that there was also a row of Bede Houses (almshouses) in front of the church.  We’re convinced that these have each been doubled in size by knocking 2 into 1, as we thought we could see where some windows may have previously been doors.   This has actually been borne out by the bit of research that we’ve done.

The church was a really open space and we were told that it was originally very dark as the windows made it so.  It’s only been relatively recently that the windows were renewed and lightened. 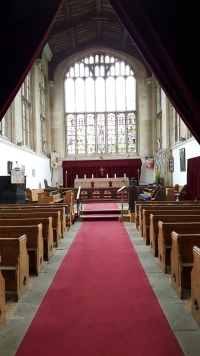 The chancel of Tattershall Church

View of the outside of the chancel at Tattershall Church

After visiting the church we headed over to the castle (which is accessed on a path passing the church).  The first building you see is the guardhouse which is now the ticket office.

We started our visit in front of the castle exploring the moat and what did originally stand on the green area – there were actually many more buildings on the site, including the kitchens that were separate to the main castle.

Then before we went into the castle itself we heard the distinctive sound of a jet overhead.  We proceeded to enjoy an impromptu display with the jet doing barrel rolls and flying over us several times in the course of the next 10 minutes or so.  When he landed another one took off!  This was from RAF Coningsby which is very nearby.

What’s left of the castle is very up together – even more so than Castle Rising.  We’re convinced that you could hook up to the electricity, pop in a bathroom and move in..!

The only thing to spoil our visit was a group of screamy kids and extremely shouty adults with them.  We just headed straight up to the roof so that we weren’t on the same floor at any time and then worked our way down..

Here’s a few pictures of the castle itself. 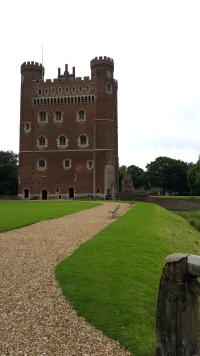 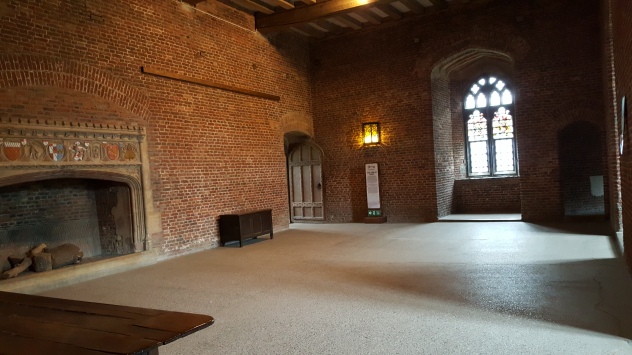 The spiral staircase with built in banister – Tattershall Castle 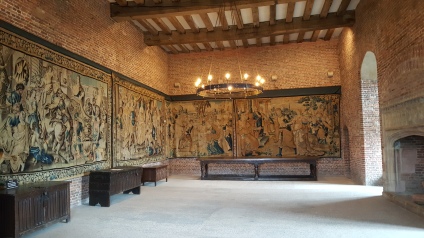 The main Salon on the top floor of Tattershall Castle

From here we headed back to Woodhall Spa and straight to the Kinema.  We went straight in (having arrived hungry and cleared the shop out of sweets…).  We were seated in Row E, about halfway back – literally.

When the adverts were finished and just before the film was to start the curtains were drawn across and then drawn back.  And there was an interval!  Halfway through the film it stopped, across came the curtains and off people went to get their ice-cream!  What a wonderful experience it was seeing a film in this iconic building 🙂 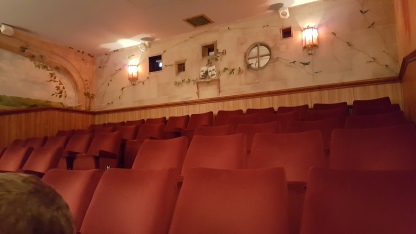 Looking back from our seat in the Kinema in the Woods 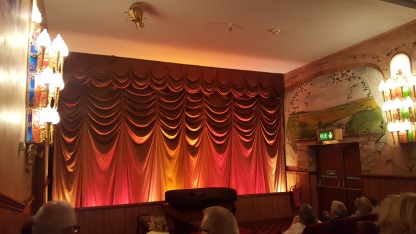 The curtain at the Kinema in the Woods

We had already decided to go into the village for something to eat, and we headed straight for the Indian restaurant.  The food was great in the restaurant but we actually wished they had turned us away as they’d squeezed us in where people normally wait for their takeaway, and then pretty much ignored us.

This was a wonderful last day however, before we moved on to Flamborough Head in the East Riding of Yorkshire.