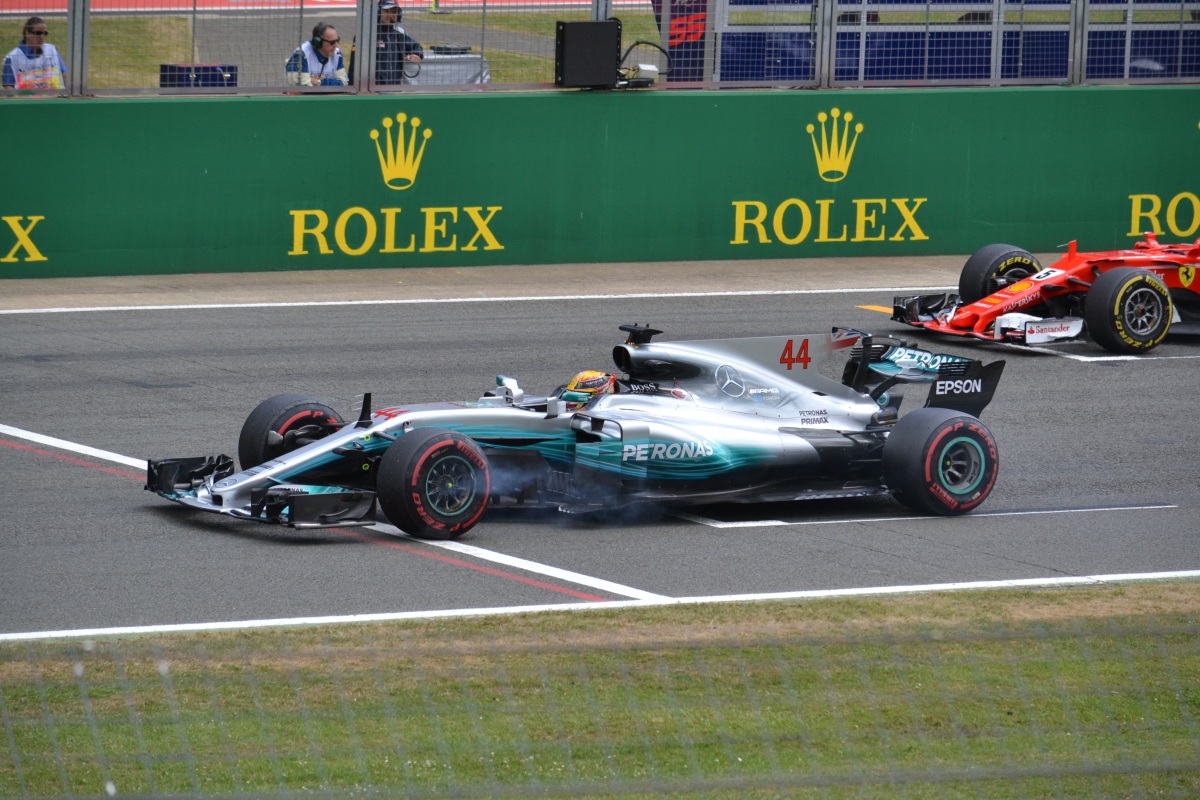 Finally I have been to the British Grand Prix!!  What a wonderful early birthday present from Calv 🙂

Therefore I am writing this post before I tell you about our first stint in Lincolnshire & Rutland while it is all still fresh in my mind.

I am including several photos, but will also do a separate post in the Gallery, so keep an eye out for that in the coming days.

We did the whole thing – camping from Wednesday (although apparently there were some who arrived on Tuesday..), practice on Friday, qualifying on Saturday and, of course, the race on Sunday.  Plus all the entertainment and the after party.  On Thursday we discovered that we could have gone into the circuit that day as well – only we hadn’t taken our tickets with us, and we were too shattered to walk back over later on!

I have to say that the camping, whilst packed in and with basic facilities, was brilliantly organised.  I have written about the campsite separately here.

I do have to tell you though that many of the drivers and teams were actually staying in the hotel, including Jackie Stewart who, we were told, emerged to speak to fans at about 9pm one evening.

That first evening I stepped out of the van to be confronted by the wonderful sight of a hot-air balloon really close by.

I’m trying to keep this from being too long so will summarise where I can.  I will be doing a separate post with top tips for if you’re thinking of going to the British Grand Prix in 2018 (or hopefully beyond…)

On Friday anyone with a 3 day ticket can use any of the grandstands (except those that are reserved like Becketts Plus).  This covers 2 qualifying sessions.  We managed to get a place in the International Pits Straight right opposite the Mercedes pits!

Hamilton & Vettel practising their starts at the end of Practice 2

On Saturday only those with grandstand tickets can use the grandstands.  We took the opportunity to sit in Becketts for a while – a good spot 🙂  We then found our seats up high in Copse B, giving us a good view through the corner itself and back towards Woodcote and on towards Maggots and Becketts, and watched qualifying from here.  It was so exciting and great to see, not only Lewis Hamilton’s brilliant pole position lap, but also Jolyon Palmer’s 11th place on the grid – he so nearly made it into the top ten shootout!  (It wasn’t very warm up there on Saturday, but was better on Sunday!)

After qualifying we headed towards the Entertainment zone in the centre of the circuit.  This is such a brilliant area with not just the usual food, drink and retail concessions but also games areas and the main stage, (where there is entertainment every night included in your ticket price – except Travis on Thursday night).  On Friday we saw Damon Hill performing with The Severs and watched The Hoosiers for a while before heading back to the van.  We were too tired to hang around any longer to hear Reef 😦

We had walked all the way around the circuit on Friday so spent some time here in the entertainment zone, where we were stunned to see Calv’s nephew, Matt, walking towards us!  What were the chances of that?! He was good enough to give us his Silverstone radios (brilliant over the ear headphones playing Radio Silverstone so that you can listen to the race commentary etc. – normal cost £15…)

As we were wandering around we saw some people waiting by barriers and asked what they were up to.  They told us that some of the drivers were going on stage and they would leave by this exit and often stopped to sign autographs.  So for the first time in my life I did the groupie thing and waited.  This was actually quite entertaining as another couple stopped and asked us what was going on – I swear this guy helped us to get the autographs that we did.  We’re pretty sure that he upset DC when he told him he was his 2nd favourite driver; when DC’s face dropped he continued with “Oh no, Jenson Button – oh, and Nigel Mansell!” Sylvia Gray, your husband is a legend!

Anyway the upshot was that I got DC’s autograph as well as Johnny Herbert’s, Jolyon Palmer’s and it was an absolute honour to meet young Billy Monger, #billywhizz, a total inspiration to us all.  If you don’t know about his story, you can find out a little about it here.

Billy Monger (and his mum) reversing back to sign autographs 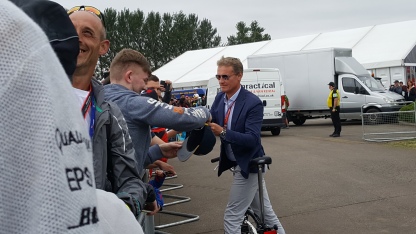 Unfortunately Lewis didn’t stop on this occasion, but this was due to the fact that he had spent over an hour in the crowd back at the main stage.  Everyone who we spoke to told us that Lewis is the driver who has the most time for his fans – this was evidenced after the race itself when he went crowd-surfing which meant that Raikkonen and Bottas had to wait for him in the press conference.  We actually saw a snippet of them waiting – 2 Finns looking bored instead of actually speaking to each other!

I did buy a t-shirt (the same one that Lewis was wearing on stage at the after party actually!), and also a sweatshirt – if I went again I would buy merchandise beforehand as there is a good 25% mark-up at the circuit….

Race day dawned – I was so excited!  We took our seats in time to see a Porsche race, and then the drivers parade – not in an open-topped bus or the back of a lorry as usual but individually in vintage cars!  Lewis jumped out at our corner, unofficially – he was ushered back in as quickly as they could get him!  Jolyon Palmer also stopped in front of us to be interviewed by Johnny Herbert – it was really gutting that another technical fault stopped him from actually starting the race itself 😦

Hamilton taking a selfie with the marshalls 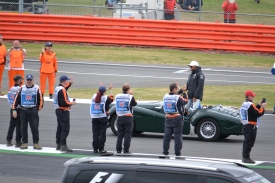 Hamilton about to leave his car on the parade lap

Then came the Red Arrows who, as ever, were absolutely brilliant 🙂

The race was very exciting – I did feel a little sorry for the half dozen or so Vettel fans in our grandstand…!!  (He does bring it on himself though doesn’t he?!)  Having said that it was such a brilliant atmosphere – the fans were cheering for Alonso, including me, Bottas, Verstappen and Ricciardo (who is absolutely hilarious – although I think he might have been a little tipsy on stage after the race…) 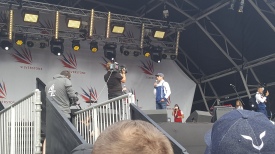 Lewis Hamilton with his family onstage

Lewis with his niece

After the race we walked along the track, which provided a good shortcut through to the entertainment zone – we couldn’t believe how close we were to the stage!  In hindsight though we should have taken the remaining spaces at the front, but to the side, as I missed out on getting Hamilton’s autograph by about 1cm 😦

The entertainment was RPJ Band – Rick Parfitt Junior – and I have to say they were brilliant.  (There will be a video in the gallery when I put it up).

The drivers who made an appearance (see previous pictures) were Verstappen, Ricciardo (together with Christian Horner), Massa, Stroll and Hamilton (although we had to wait a while as he was assembling his family to come on stage with him 🙂 ) I did feel sorry for the French couple who were stood with us as they waited ages but had to leave as they had a ferry to catch – I tried to tell them that they’d probably be able to get a later one but think it was lost in translation…

Hamilton spent ages on stage, making the bloke from Sky (Tony something.. – I don’t watch Sky…) get back down to the crowd to take more questions.  He then came down to sign autographs and have photos taken, but I was just that little bit too far back.

I’m going to stop now (I could go on!)  Suffice to say this was the most brilliant weekend – enjoyed by Calv as much as by me – and we are thinking that we might just have to return in 2018 🙂