So the day has arrived for our daytrip to Monaco.  I couldn’t be more excited!  I put on a dress and some nice earrings with a matching necklace and sandals instead of flip flops – just in case you know?!  I even took a proper handbag….  (none of it was needed unfortunately).

We headed back up the coast road to Cannes to pick the motorway up there, instead of going back on ourselves to Frejus.  Unfortunately there was a road closed just before the motorway junction (presumably for an accident) which delayed us somewhat.

This section of the motorway itself has some amazing views; at times it’s a series of viaducts and tunnels hewn out of the rock!  The football stadium at Nice is quite impressive and stands right next to the motorway.

Once off the motorway we’re headed into Monaco.  We had no idea what to expect really, our only view on Monaco coming from the Grand Prix coverage 🙂 We covered most of the ground looking for somewhere to park, and ended up in the Grimaldi Forum, just before the beaches.  Opposite are the car showrooms.  We’re not talking Volkswagen and Renault here – think more Bently, McLaren, Ferrari; there might even have been Maserati or Lamborghini!!

Outside the grand prix tunnel

Inside the grand prix tunnel

Once through the tunnel you hit the harbour.  This, unlike Cannes, is free for everybody to wander, and there are bars and restaurants.  We couldn’t use any ourselves as they were just so busy (we had to make do with a pizzeria just above the harbour – still had a great view of the yachts though).

Now, if you think that Cannes and Antibes can be said to be dripping in money, then Monaco is absolutely melting in it.  The yachts we saw (up close this time, some with doorbells!) and watched parking, and those that were too big to come into harbour, were just spectacular – what any of us mere mortals would give just to set foot on 1 of these beauties 🙂  Some of the names that I can remember that you might want to look up – Sweet Doll, Lady Maura, My Lisa – there were so many, I’m afraid I can’t remember anymore! 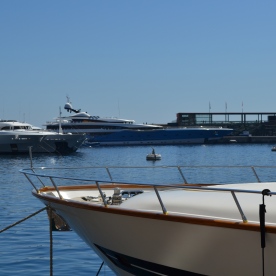 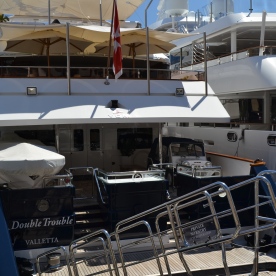 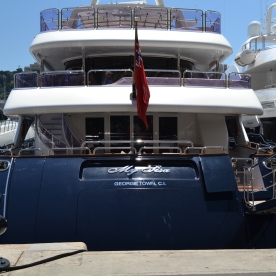 Very accessible (although only to look..!)

So at lunch (fairly mediocre pizza and salad and a miserable waitress – who didn’t get a tip (that shows how miserable she was as I always tip..)), as we’re watching all the amazing cars drive past (on the busy, some might say, congested streets) – you know, the usual Bentleys, Rollers, Ferraris and so on, Calv suddenly says ‘I think I just saw that bloke who commentates on the Grand Prix go past.  You know, the one who used to race’.  ‘Square jawed?’ I asked.’Yes’  He saw David Coulthard (in a big car – unusual for Calv not to state the make, model, valves and brake horsepower, but this time it was just a ‘big car’) and he didn’t immediately grab me and shout ‘Look!!’ Muppet….. 🙂

We’d already decided that the best way to see Monaco was to take the open top bus tour (you know the ones, hop on-hop off) as we had no idea what else there was to see.  It was quite expensive (at 22 euros each) but it was worth it as we saw all of Monaco!

We hadn’t gone all the way round the harbour as half of it was taken up by a showjumping extravanganza that was due to start the next day.  I think we might have seen some pretty famous horses – if only we’d known what to look for..

We got off the bus in the old town where the Princes Palace is located.  Here there were ceremonial guards outside who, every now and then, left their sentry boxes to parade up and down.  This was so clearly for the tourists, but I couldn’t help but compare them to the Coldstream Guards – difficult as there really is no comparison.  They wandered out of their box making an effort to stand up straight and march, but struggling not to stroll!  I’m afraid I found it quite amusing rather than impressive.  In the picture below the one in the background has popped into the tunnel for a sneaky cigarette! 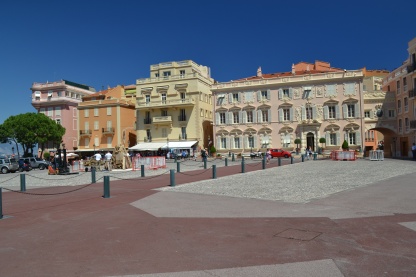 Monaco’s equivalent of the Coldstream Guards

From up here we could clearly see ‘the swimming pool’ – a rather large and very inviting looking pool!  Trust me, I was tempted. Today it was full of people, but also surrounded by the horse show (which is why we didn’t see it up close).

The square and the architecture and the views were, however, impressive.  From the walls here you can see another, smaller, harbour – this is where the smaller boats go to dock!  Some of them would still be out of our price bracket (even if we’d used all salary that we’d earned in our life so far…) however, compared to the yachts in the main harbour they were just little babies.

The smaller harbour (for the peasants..) 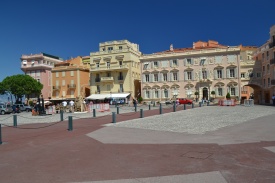 In the souvenir shop they were selling lots of grand prix memorabilia – mostly Ferrari to be fair.  We asked about a Hamilton t-shirt/cap and the woman offered us a Rosberg t-shirt!  You’d have thought she’d know wouldn’t you??

We made it round to the next stop ready to catch the bus again, thought it had stopped so headed towards it, only for it to start up go past us and stop elsewhere.  So we turned round to head towards it again, only for the driver to go just before we reached it!  Not impressed but can only assume that it’s because he was blocking the road, as there was a builders van parked in his stop.  Still not happy though.  Not least as the temperature was now topping 33 degrees and we were having to find shade to wait for the next one (meant to be 15 minutes, but was actually 30..)  So anyway the tour continued – we saw the other harbour and went down to the end of the main harbour where the cruise ships dock, we saw the stadium and went through Casino square – this is where we got off.

We went into the Café de Paris (although at the time we thought we were going into the Casino itself), and were asked to pop the camera and my bag in the cloakroom (very politely thank you very much).  We were in a casino full of slots.  Whilst it was very much more upscale than Vegas I was still a little surprised that it wasn’t a bit less tacky, shall we say (remember I thought we were in the Grand Casino…)  I put 10 euros in and at 1 stage I was 46% up, but Calv irresponsibly encouraged me to keep going, and I lost the lot (well I had 20cents left but I left that in the machine for the next player!)

When we came out (and saw a McLaren pass by. Like you do..) we realised that actually the building just over there, to the left, was the Grand Casino.  This place is very impressive – they allow you in to look around the lobby area, and you can pay 10 euros to actually go into the Casino itself – we decided against it, I would have been far too intimidated to even think about trying to play.  But the lobby – wow!!  No other word for it.  I don’t know if the photos quite capture the splendour, but here goes. 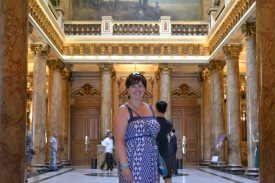 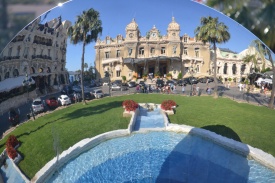 Just below the Casino square is the Buddha Bar (don’t know what was going on there today, but there was heavy security), and then the Fairmont Hotel (which looks pretty exclusive to say the least).  Those of you in the know will be aware that this sits behind the famous hairpin (although I’ve never seen the hotel in the coverage – perhaps I’m just not looking..)  We actually went round it in the bus (twice I think), we walked round it and later on we drove round it (the wrong way according to the racetrack 🙂 )

And so concludes our day in Monaco.  We found our way back to the car with no incident, but ended up taking some of the coast road back to the site, as far as Nice (which we didn’t know had trams), as we needed to get fuel.  Neither the parking or the fuel were overly expensive which was a pleasant surprise.

We eventually found our way back to the motorway (we only went the wrong way once), and got home without further incident.  There was horrendous traffic going the other way though.

Nothing more to report as we were completely jiggered, so I think it was beans on toast for tea.  I would say we actually went to bed early, but I think the earliest night we’ve had on the whole holiday (apart from on the ferry when we retired before 9pm..) was about 10.30 (that’s late for us btw!)

A Lifestyle/Fitness Blog with Added Inspiration and Motivation