A brief review of all campsites that we have stayed on in the UK (please bear with me, this is a work in progress! I’m starting with the most recent and working backwards. Eventually I will cover all campsites that we have stayed on over the years 🙂 )
We often use Camping & Caravanning Club certificated sites and occasionally Caravan Club. We also use PitchUp and UKCampsites online to help us find where to stay, if we’re struggling.
Unless we’re trying to cover school holidays (which we’ve now decided we probably don’t need to worry about) we choose our next site a couple of days before moving on!
Just click on the link to see my review for the campsites that we’ve stayed on:- 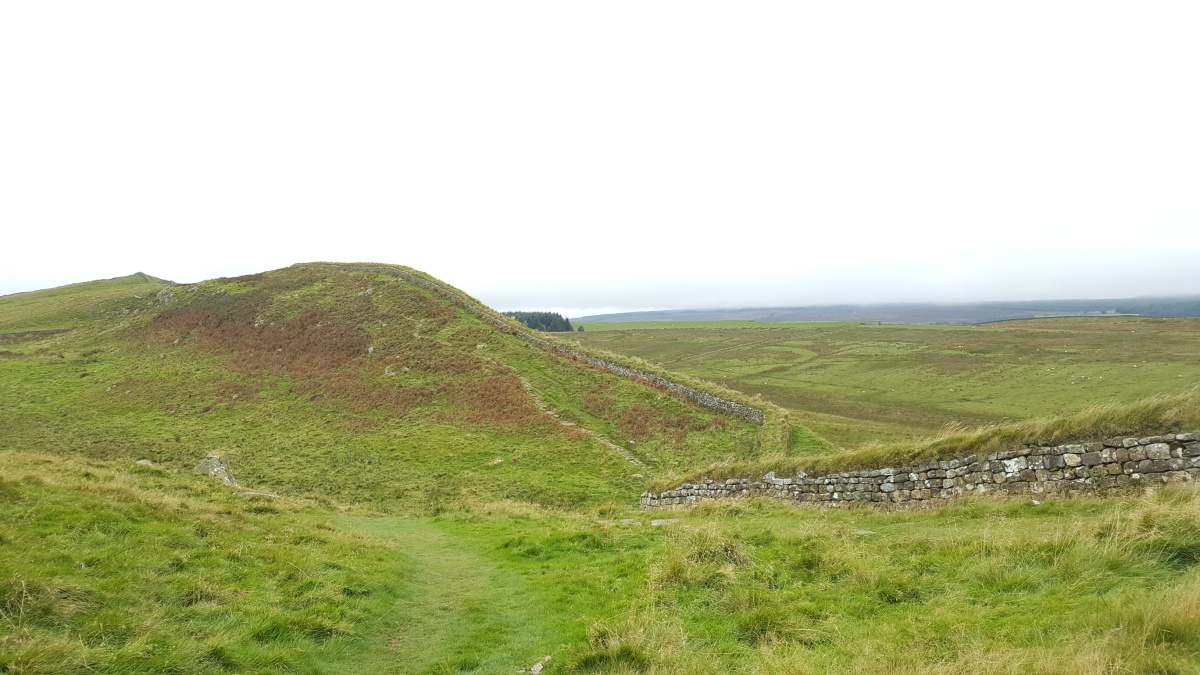 After the North York Moors we headed back inland to take a look at Hadrian’s Wall in Northumberland.

By pure chance we stayed on a campsite, a few miles north of Corbridge and Hexham, that was right on the route of the wall – unfortunately there weren’t any sections of wall here, but it did mean that we weren’t too far from any of the main sights.  For us these were: Corbridge Roman Town, Chesters Bridge & Chesters Roman Fort, Housesteads Roman Fort and Heddon on the Wall.

Our first full day saw us visiting Corbridge Roman Town and also Hexham.  Corbridge itself is a very pretty little town which we drove through to find the old Roman town.  This is an English Heritage site (as many of them are along Hadrian’s Wall) and we were really surprised by just how engaging our visit was.

The 1st item of interest that you come to is a Roman road that you can actually still walk along – the bit that is left is believed to be from the 3rd century AD.  We had audio guides and along with the plentiful information boards this kept our interest all the way around the attraction. 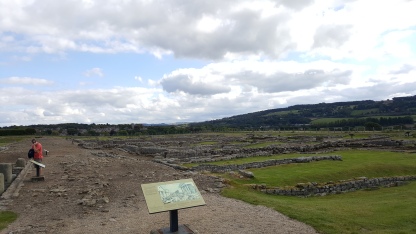 Before heading back to the van we headed to Hexham for a little look around.  As usual we parked a little way out and walked back into town, where we were able to visit the abbey (free to enter), which was very interesting, but there was clearly an event being held that evening (and we were there quite late in the day).  This meant that we weren’t able to visit the crypt which seemed to be a very interesting area.

There is also a moot hall and an old gaol to visit, but we were too late for either!  The town is definitely worth a visit though, and not just for the fact that this is where you’ll find several supermarkets and takeaway options. 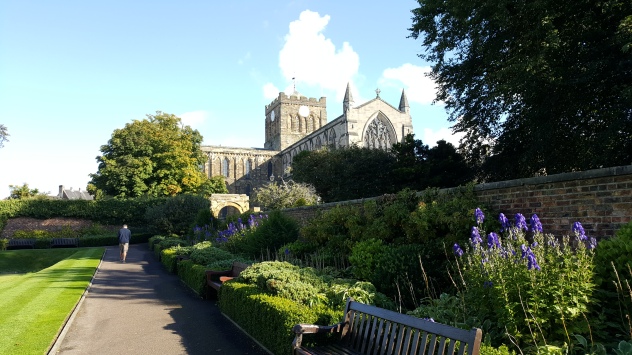 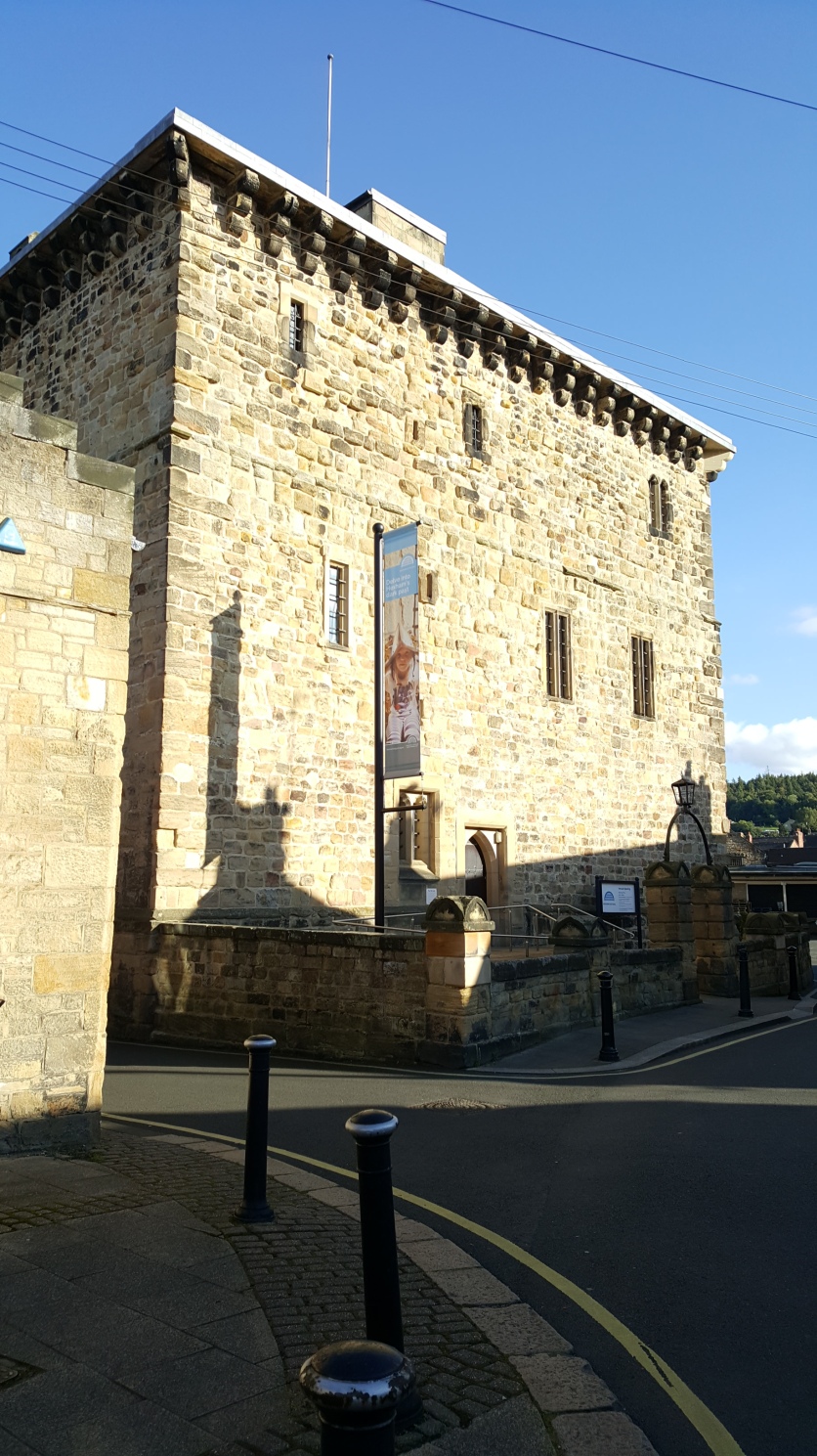 The following day we headed in the opposite direction and found Chesters; 1st the Roman bridge remains (at the end of a 3/4 mile long footpath).  It’s amazing to see how much is actually left and we could also see across the river to Chesters Roman Fort which is where the bridge led to.

So this was our next stop.  Again an English Heritage site with lots of information available.  Many of the Roman remains that we are able to see today in the area were saved due to the actions of 1 man, John Clayton, who inherited the land from his father and started excavations.  He also bought up neighbouring estates when they became available in order to save the ruins from being lost completely.

In the grounds of Chesters there is a museum, built by his son, that houses many of the objects that he excavated over the years.  We visited both at the beginning and end of our visit!

The stand out attraction on this site is the remains of the bath house which are quite extensive.  We were also able to look back over the river towards the bridge remains.

Chesters Roman Bridge with added ‘sculpture’. Apparently these were common and were believed to bring luck!

We still hadn’t seen any of the actual wall so we carried on along the road and after a short while we caught our 1st glimpse.  We parked up by the side of the road as soon as we were able and walked back along the Hadrian’s Wall path to see the wall. 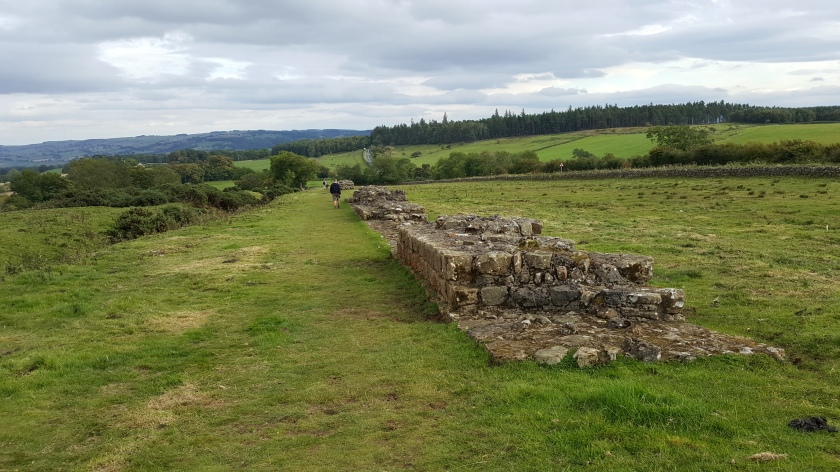 The following day we continued further along the same road to visit Housesteads Fort.  Once again we drove into and back out of the official car park (as it was run by the park authorities rather than English Heritage. NB: Corbridge Roman Town and Chesters car parks are run by English Heritage so these charges don’t apply).  They were charging £3 to park regardless of how long you were staying.

The lady at Corbridge Roman Town suggested that we parked a couple of miles away at Steel Riggs where she said the parking was cheaper – we looked but it was actually £4 there!  So we found a layby about a mile along the road from the fort and walked from there.

We made it difficult for ourselves, heading up the hill to join the main path (it wasn’t easy walking!) and when I saw 1 of the bulls at their feeding station staring us down I insisted on retracing our steps and going a slightly longer way around!  We came across a structure at the top of the hill that was probably a part of the wall (there were milecastles along the route, and smaller watchtowers) which we explored a little.

On the way to the fort we came across a short section of the wall that is actually part of the path (much of the actual wall is off limits to walk on), and shortly after this section you get to the fort itself.  This fort’s main attraction is the remains of the latrines where the flush system still works when it rains hard!  We were expecting to be getting bored of the Roman remains by this point, but it actually wasn’t the case – each of the sites has a different reason to visit.

We found a quicker way back to the car by following the tarmac road past the education centre (so no encounters with bulls this time 🙂 ).

Next stop was the town of Haltwhistle, apparently the centre of Britain.  There were a couple of points of interest, but unfortunately not an awful lot was made of these and overall the place was a little depressing.

At 1 section I was a little behind Calv in coming back down the hill, and spotted a cow keeping it’s beady eye on me (you have to be careful when they have calves with them).  I had to move fairly fast to get to the gate before the cow got to me!!

We also spotted ‘The Tree’ from Robin Hood, Prince of Thieves!

We also saw another section of the wall at Heddon on the Wall; just a small section though and probably only worth seeking out if you’re actually heading that way.

In my next post I will tell you about the other things we did while staying here: Beamish Museum, the Angel of the North and Prudhoe Castle.

When your little nephew accidently hits your great niece in the face with a Frisbee, and they're both breaking their hearts - 1 because their face hurts and the other because they're upset to have hurt someone 💞 #family #nephew #greatniece #frisbeeaccident #crying #cuddles
Couple of highlights from my big walk back to reality - in a minute I'll be getting on a train!! #backtoreality #backtonormality #wildflowers #realstudentstoteach #inarealclassroom #kaplan #veryhappy
Garden looking good despite the weeds. However it's 33°in the shade so weeding will have to wait (I did try...) #garden #thriving #weeds #hothothot🔥 #weedingcanwait #toohottoweed
Heading home from our UK road trip. Sad but happy as I'm back teaching in a real classroom on Friday 😀 #homewardbound #ukroadtrip #vanlifeuk #vanlife #backtoreality #backtowork #backtoclass #summerdays #familytime #basingstokecanalcentre
Today we managed a few hours on the beach. Having left the beautiful beaches of South Devon and Cornwall behind our best option seemed to be ladram Bay (as we have access to the private beach as we're staying on their sister site) . Apart from the pebbles it was lovely (plus we were prepared!!) and I did get all the way in, out of my depth and everything 😊 (I even have proof) it was icy cold so quite an achievement) even if it did take me about 20 mins - I was acclimatising 😂 #vanlife #beachlife #ukbeaches #pebbles #ladrambay #devon #treetunnel #icycoldwater #coldseawater #seaswimming #homeiswhereyouparkit #beachday
Today we went out on a cycle ride along the Exe Trail. Now what do you call a pub crawl when you're on your bikes? We've settled on #pubpedal - it seems we're not the first to come up with this!! First we had to get there, which was 4.5 miles (about 7 on the way back....) the cycle track is brilliant ; mostly off road with a few lanes into and around the towns/villages. We visited lovely Lympstone (where Michael Caines runs Lympstone Manor), Exton and Topsham (again) we've had a brilliant day, even with the unintended extra miles at the end!! And yes, 2 pubs did equal a pub crawl (for us anyway!! 😂) #cycling #ebikes #exetrail #cyclepath #lympstone #theswaninnlympstone #exton #devon #puffingbilly #pubpedal #flowersofinstagram #flowerdisplay #cubebikes #localcider #localbeer #tarkabrewery #sandfordorchards
Loading Comments...