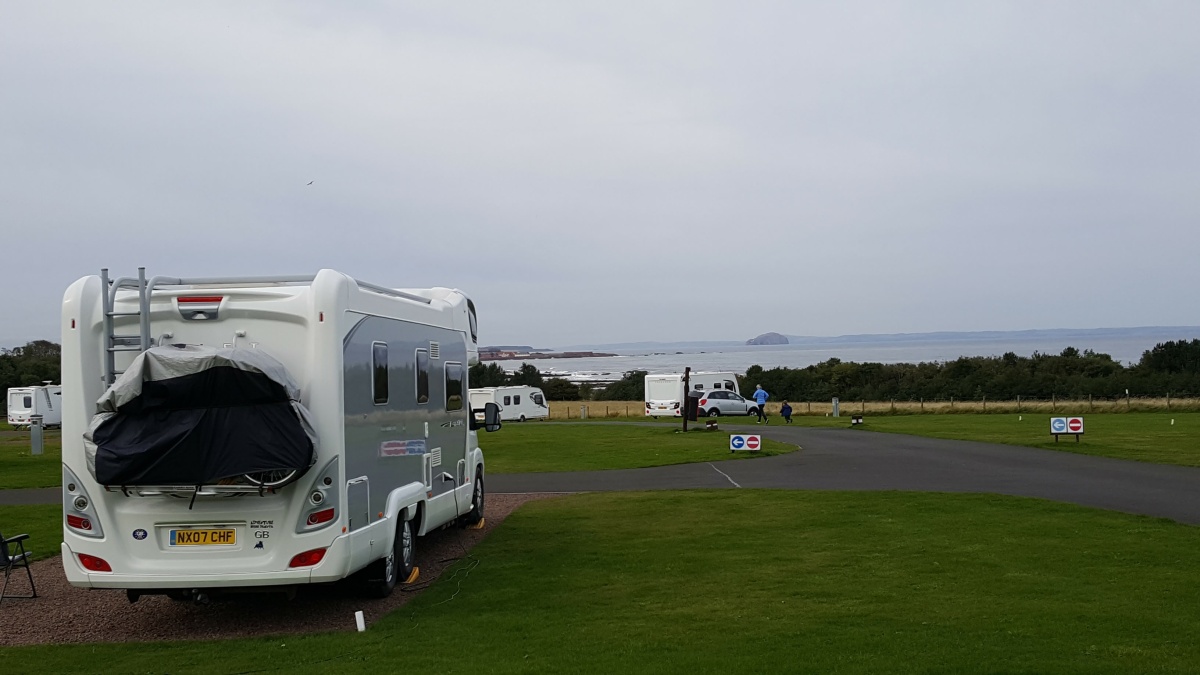 A brief review of all campsites that we have stayed on in the UK (please bear with me, this is a work in progress! I’m starting with the most recent and working backwards. Eventually I will cover all campsites that we have stayed on over the years 🙂 )
We often use Camping & Caravanning Club certificated sites and occasionally Caravan Club. We also use PitchUp and UKCampsites online to help us find where to stay, if we’re struggling.
Unless we’re trying to cover school holidays (which we’ve now decided we probably don’t need to worry about) we choose our next site a couple of days before moving on!
Just click on the link to see my review for the campsites that we’ve stayed on:-

There is water everywhere in the Dales.  Tumbling over rocks in rivers and streams that run alongside the road, flowing serenely into Tarns, ready to be enjoyed in reservoirs and thundering down falls or over escarpments.

However you experience it it’s awesome beauty cannot be ignored 🙂

We have made it our business to visit 3 areas of falls; Aysgarth, Hardraw Force and the Cauldron Falls at West Burton (not even mentioned in guidebooks!)  I think we actually enjoyed the Cauldron Falls most as we were able to explore them more fully – we were almost able to walk behind them 🙂

Note: I will pop most of the photos at the end on a slideshow 🙂 END_OF_DOCUMENT_TOKEN_TO_BE_REPLACED

I know I’m out of sync (I’ve not yet written about Bolsover and York, Harrogate and Knaresborough), but this can’t wait!

We arrived in the Dales on Tuesday and as we drove towards our campsite near Aysgarth my breath was quite simply taken away by the beauty all around us.  I could have cried 🙂  This was even though it was raining when we arrived!

Once settled in we set off further along the B road (and deeper into the countryside) to explore a little.  We were just completely blown away by what we were seeing – water rushing along beside the road, falling over rocks and dropping from height – all around us!  We had to keep stopping to wonder at it all and, of course, take photos 🙂

Eventually we found ourselves stopping just past the White Lion Inn at Cray, alongside part of Buckden Pike (712m).  There were stepping stones across the water and a National Trust public footpath signposted up the pike, so, naturally, we decided to follow it. 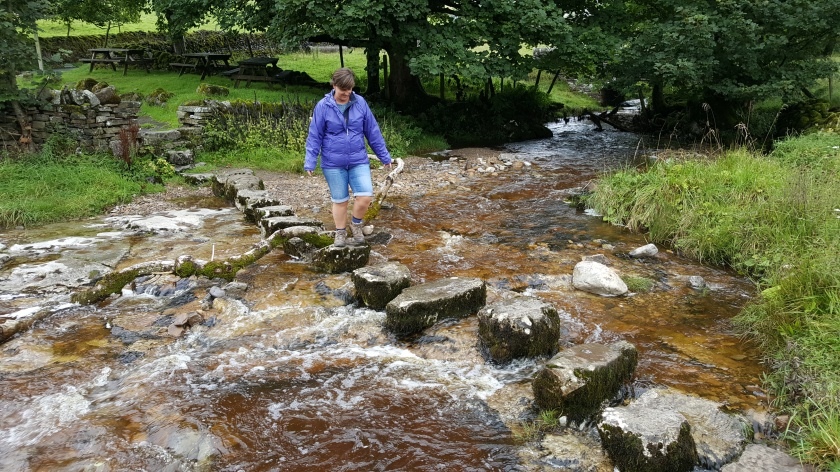 I had it in mind to follow a shorter path towards Cray Bridge (1/2 mile) but Calv had other ideas, went the other way and kept on walking…!  We almost made it to the top of what we could see, but were scuppered by a drystone wall (as we had veered dramatically off the path – and didn’t we know it!)  This was quite hard walking (for me anyway!) and I was really proud to have got so far.  Coming back down was at least as hard as going up.

One of the disinctive stile gates on Buckden Pike 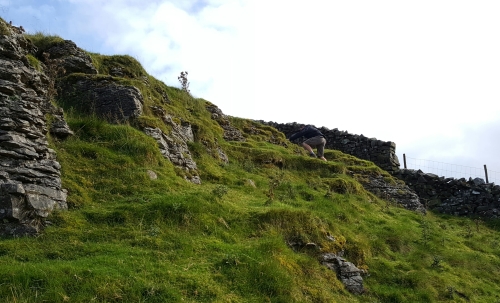 Calv scrabbling up Buckden Pike (I did follow him 🙂 )

We had come out without a drink (not expecting to go for a long walk of course) so decided to have a drink in the pub.  Naively I was expecting a pub in the heart of the Dales to be a little cheaper.  Right….!!  We’ll take our own drinks out with us in future!!

There was an interesting game on the wall here though, called Bull Ook, which involved swinging a ring to be caught on the hook of the bull’s nose.  It was very difficult – in fact we found it impossible!

From here we carried on along the main road for just a short while before we saw a single track lane on the right pointing towards a pub, JB Priestley’s favourite watering hole according to a sign.  So we headed this way, which brought us to the tiny village of Hubberholme, the main features of which are an unusual church, a lovely stone bridge over the fast running river and a pub (that doesn’t really look like a pub) with a history.

They call it the Hubberholme Parliament and, so my Rough Guide tells me, this relates to the practice of local farmers bidding to use 16 acres of church land for the year, the proceeds of which are used for the poor of the parish.  A candle is lit and the auction overseen by the vicar in the dining room (The House of Lords), the farmers place their bids in the bar (The House of Commons) and the highest bid when the candle goes out is the winner!  The auction is still held today – on the 1st Monday of the New Year.

The fact that the pub, having started life as a farm, was at one point the vicarage might explain why some church furniture had to be rescued from the pub where it was being used as a bar.

We continued along this back road, with no idea where we were heading!  We ended up driving up and up, over cattle grids and finding ourselves in a completely empty landscape.  By which I mean very few properties!

What we did see though were numerous birds of prey; sparrow hawks, kestrels and owls!  Yes owls, 3 of them, in daylight!  And the views!!  Unfortunately we just couldn’t get any usable photos 😦 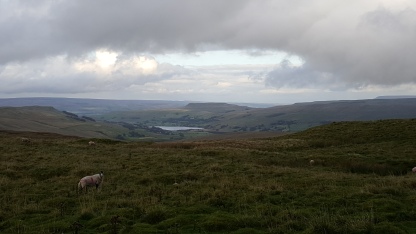 This road eventually brought us back to civilisation via Gayle, a village with some history as a mill area – there is a restored mill here which is open to the public.  The road brought us out to Hawes, with a couple of museums – Dales Countryside Museum and Ropemakers as well as the Wensleydale Creamery where you can watch the cheese being made.

Tired now we headed back to the van, exhausted by taking in all the views along the way.  But we couldn’t wait to get back out into the countryside the next day when we’d already decided to visit Aysgarth Falls themselves.

On the way back we found an excellent shop by Aysgarth Garage (although the fuel itself was very expensive), and also a shortcut back to the van through Thoralby village.

On the way up this lane we were held up by a herd of cattle being moved from the farmyard out to the field, at the back of which was one that clearly had a very bad hoof.  I felt so sorry for her 😦

We’re also now back to feeding ourselves properly in the van, which saw me making a chicken, leek and bacon pie for tea 🙂

All in all ready for our bed!  Day 2 will see me tell you about our walk to Aysgarth Falls 🙂

Day 128 of 2021. A walk from site around Old Sarum (we didn't go in this time, will save that for another visit) surprised and pleased to discover that the site of the old cathedral is fully accessible and explorable 😊 lots of good walking and cycling paths around here + amazing views over the city and beyond. (just a shame about all the dog mess) We will definitely be returning 👍#day129of2021 #apostalmosteverydayin2021 #salisbury #oldsarum #oldsalisburycathedral #salisburyclubsite #hudsonsfields #views #vanlife #walking #turnrightoutofportsmouth
So sorry for 2 posts in 1 day but we are LOVING Salisbury and just wanted to share 😊 #2postsin1day #salisbury #medievalcity #surprise #loveit #rightonourdoorstep
Day 128 of 2021. That's old Sarum over there. Even in this weather there were people over there just now walking on the ridge! We're just waiting for the rain to stop, and hoping that the wind dies down a bit (bit of a long shot that) before heading down into Salisbury for a wander. That bird flew into my shot!! #day128of2021 #apostalmosteverydayin2021 #salisbury #oldsarum #seagull #campingintherain #britishweather #vanlife #homeiswhereyouparkit
Day 127 of 2021. Off away for the weekend. Calv's plan for when it rains is too sit in the van eating these bad boys (bought only because they're on club card price in Tesco). Can't wait to tell him the rain's now due to clear by about 10am 😊 #day127of2021 #apostalmosteverydayin2021 #weekendaway #vanlife #icecream #magnumdoublecaramel #rainexpected #salisbury
Day 125 of 2021. A hailstone downpour.. It's May!! Better not damage my new plants 😏 #day125of2021 #apostalmosteverydayin2021 #hailstones #madweather #hailstonesinmay #dontkillmyplants
Day 124 of 2021. Finches in the garden. I love watching these 2 - just before I started filming they jumped in unison to the top perch and then back down again 😊 I'd definitely be getting seasick on that perch in this wind!! #day124of2021 #apostalmosteverydayin2021 #finches #birdfeeding #hangingbirdhouse #windy #gardenbirdsuk
Loading Comments...
Comment
×